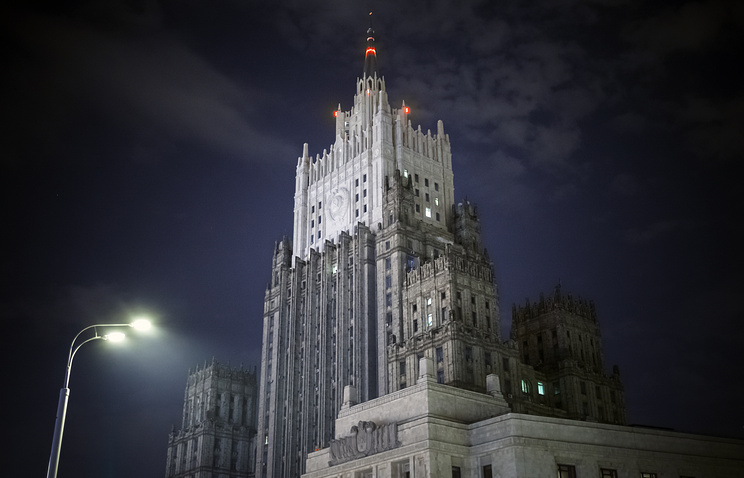 MOSCOW, October 12. /TASS/. Moscow calls on foreign partners of Ukraine, which has influence on its management, to take measures to prevent violence and riots in this country. This is stated in a statement on Thursday comments by the Russian foreign Ministry.

As emphasized in the Russian depodesta, the concern appeared in the Ukrainian media reports about the plans of the radicals from the party “Freedom”, the movement “Right sector”, OUN (banned in Russia) and other nationalist organizations to hold in the center of Kiev and other cities of the torchlight procession on the occasion of the anniversary of the Ukrainian insurgent army (UPA prohibited in Russia) on 14 October.

“A year ago we have already witnessed how distraught the crowd, proudly proclaiming themselves the ideological heirs of the “cause” of Hitler’s minions, like Bandera and Shukhevych, brazenly marching under Nazi banners with swastikas and shouting Nazi slogans, recalled in the Ministry of foreign Affairs of the Russian Federation. – At the same time, the Ukrainian streets were openly calls for the continuation of the “war” with Russia: the capture and burning of banks, prosecution of journalists and dissidents, to the demolition of monuments of relevance to the overall story. Attempts were also made to attack and plunder the temples of the Ukrainian Orthodox Church, in particular, the Kyiv-Pechersk Lavra”.

“With regret we have to admit that for modern Ukraine such covens become commonplace – the country is slipping deeper into the abyss of a neo-Nazi. Judging by the lack of adequate reaction to the rampant fascist forces in Ukraine, apparently, this is the current Kiev authorities and see “her true path to Europe”, – said in the Ministry.

The Russian foreign Ministry warned that a split and the continuing social tension in Ukraine are the antics of the extremists can lead to violence and riots. “We call on foreign partners of Ukraine with leverage in its leadership, encourage Kiev to take all necessary measures to prevent the development of the situation in this dangerous scenario, – said the Russian Ministry. – Appeal to the Special monitoring mission of OSCE in Ukraine to monitor closely the situation in the country, locking in their reports of possible provocations and give them a proper assessment.”