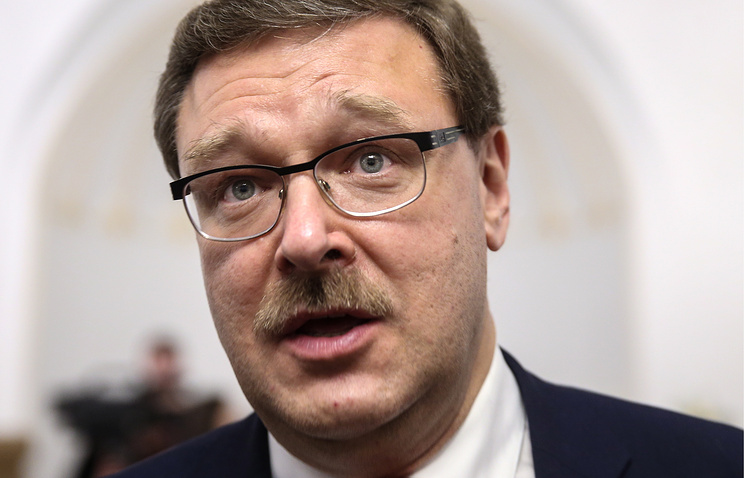 SAINT PETERSBURG, 15 Oct. /TASS/. The main burden of responsibility for post-war reconstruction of Syria needs to carry the West, which at one time undertook to democratize the middle East. This opinion was expressed on Sunday, TASS the Chairman of the Federation Council Committee on international Affairs Konstantin Kosachev.

“It is clear that the responsibility for the fact that Syria’s civil war began, which, in turn, have used terrorists are, on the one hand, the Syrian authorities, on the other – those who are provoking the Syrian opposition into armed resistance,” said the Senator, responding to a question.

According to him, is “the same Western countries, which have undertaken to democratize the greater middle East”. “And Syria is one example of how the forceful export of democracy have led to the opposite and destructive for this country consequences,” he recalled.

“So, of course, the main burden of responsibility for post-war reconstruction of Syria needs to take on Western countries,” – said the head of Committee of the Federation Council.

“Russia is now virtually alone provides humanitarian assistance to Syria, because it is the most pressing issue, and here we see no large-scale humanitarian aid from the West,” said Kosachev. “So I think we are a part of the way is over, we can talk about a very specific implementation of some programs of aid to Syria, and I was not expected any more ambitious or proactive participation from the side of Russia in relation to what should be required to make the so – called West,” he concluded.

The situation in Syria

October 14, Syrian government forces liberated from the militants of banned terrorist group “Islamic state” (IG banned in Russia) the city of Mayadin, which until now was the largest settlement remained under the control of the IG. As reported on Sunday Agency Reuters referring to the statement of the military coalition of “democratic Forces of Syria” (SDS), supported by the United States, she began the final stage of the operation to release the unofficial capital of ISIS city raqqa.

Speaking on Saturday at the opening Assembly of the Interparliamentary Union in St. Petersburg, Russian President Vladimir Putin urged the world community to think about post-war reconstruction of Syria. According to him, it is worth thinking about, “how, in what forms, amounts” to help Syria and other countries in the region as “do more to promote their socio-economic development and strengthening of state institutions, including the legislative branch of government.”