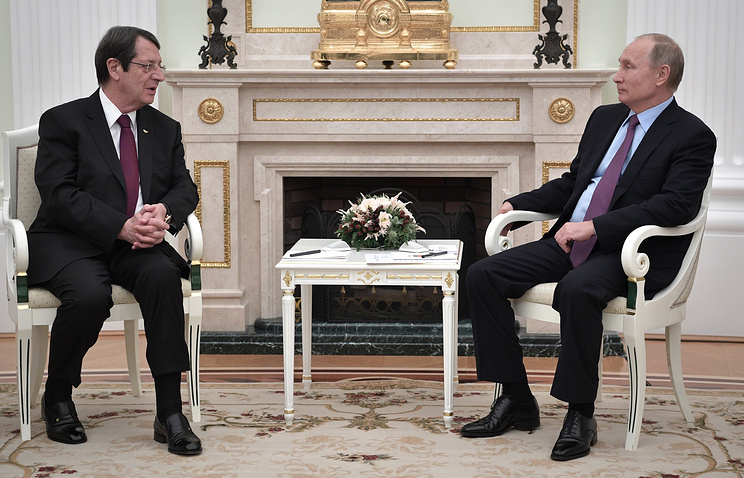 MOSCOW, October 24. /TASS/. The final solution of the Cyprus problem cannot be imposed on other countries, it must be taken by the Cypriots. This opinion was expressed by Russian President Vladimir Putin following talks with President of Cyprus Nikos Anastasiadis.

“We reiterated to the President the principled position of Russia in favor of a comprehensive and just settlement in Cyprus based on UN security Council resolutions and agreements of the parties, he said. – Believe it is important that the final decision was made by the Cyprians themselves, without outside interference and the imposition of ready recipes”.

Anastasiades thanked Putin for the principled position of Moscow on the Cyprus problem, which is based on the principles of international law and the decisions of the UN security Council. “We say we are willing to dialogue directly on the inner aspects of the [Cyprus] problem, – said the President of the Republic of Cyprus. For questions about the international aspects of the problem, I noted that here you need a very good preparation for the relevant meetings with the participation of the UN Secretary General and the Council BAA.

Cooperation in the field of Economics

Russia and Cyprus signed the intergovernmental Declaration on cooperation in modernization of economies.

Putin and Anastasiadis signed a joint action programme between Russia and Cyprus in 2018-2020.

In addition, the parties entered into three agreements between the governments of two countries on international road transport, sea transport and on cooperation in the field of communications and information technology.

He noted that countries attach great importance to direct contacts of the business. “Unfavourable global market conditions and external constraints caused by political reasons during the previous three years has a negative impact on the dynamics of trade. However, thanks to the joint efforts undertaken in the first eight months of the current year the mutual trade turnover grew by 36%,” – said Putin.

The Russian leader said that in Cyprus, there are branches of the largest Russian banks. “Their line is that the whole range of investment and financial transactions. There is also potential in the field of military-technical cooperation,” Putin added.

The expansion of cultural ties

Russia and Cyprus are planning further expansion of cultural ties between the two countries, said Putin. “Traditionally, priority in the relations between Russia and Cyprus is a cultural and humanitarian contacts. Mr President talked about expanding our cooperation”, – he said.

Special attention during negotiations was paid to the development of tourism. “Cyprus is one of the most popular places of rest of our visitors. Last year the island was visited by more than 800 thousand of our citizens, and for the first nine months of the current year this number has already exceeded 700 thousand,” – led the statistics of Putin.

Putin also discussed with Anastasiades restore the Christian presence in the middle East.

The Russian President said that Cyprus is near the Middle East, and in the negotiations the Russian side has informed the leadership of this Republic “about our efforts to combat terrorism in Syria.” “Talked about the need to restore the Christian presence in this region of the world, spoke about the need to restore communities and normal dialogue between them,” – said the Russian leader.

In addition, Putin said that he briefed Anastasiades on “the situation that is developing in the framework of the Minsk process on the settlement in the South-East of Ukraine.”

The President of the Russian Federation as a whole thanked the Cypriot side for full and constructive dialogue.