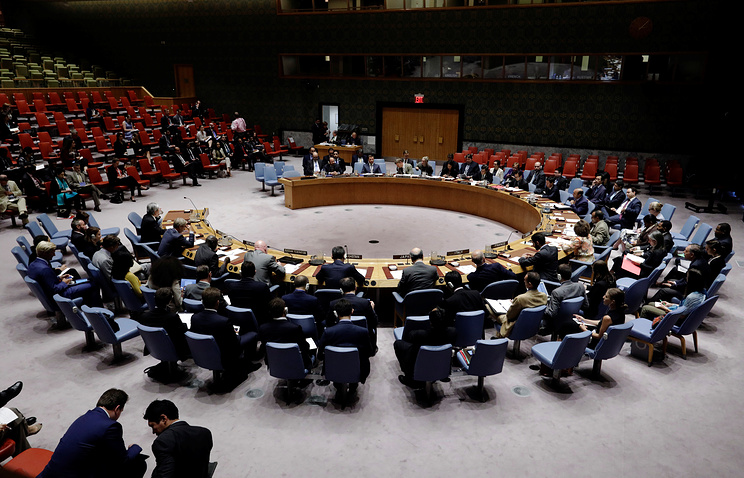 UN 24 Oct. /TASS/. Russia on Tuesday blocked the adoption of UN Security Council resolution inconsistent on the one-year extension of authority for Joint UN and the Organisation for the prohibition of chemical weapons (OPCW) to investigate the chemical attacks in Syria (CMP). Together with Russia against the document prepared by the United States, Bolivia voted with two abstentions countries – Kazakhstan and China. Another 11 countries, including the UK, US and France voted for the draft resolution.

“The draft resolution was not adopted due to the negative vote of a permanent member,” announced the President of the security Council, French Ambassador Francois Delattre.

Before the vote Russia proposed to postpone the consideration of the extension of the mandate of the CMP to 7 November, to wait for the release of a report with the results of the investigation of the incident in Khan Sheyhun 4 APR. However, this initiative did not find support of the required majority of the members of the security Council.

Speaking at a meeting of the Security Council, Russia’s permanent representative to the UN, Vasily Nebenzia said that the US desire to force the extension of the mandate of the CMP is “no logic”, and urged “calm and balanced” to make the decision after the publication of the report. According to him, inconsistent draft resolution was put to vote to “defame Russia”, forcing it to veto the document. “Let’s not pretend we don’t understand what’s going on here”, – the diplomat said, accusing the US of undermining the unity of the Security Council.

“What is happening today, the bad smell,” – said Nebenzia. He drew attention to the massive information campaign launched by Western countries in the media on the eve of voting in the Security Council, including statements and interviews with his American colleague, Nikki Haley. Russia’s envoy studied her remarks, noting that she deliberately distorted Moscow’s position. “What is it called? This is called the artillery preparation”, – concluded the diplomat.

In anticipation of the report

The term SMR is set to expire in November, and a final report is expected to be unveiled on October 26. In one of my previous reports, the investigators blamed for three cases of the use of chemical agents in Syria on government forces, and another one on the militants of the terrorist group “Islamic state” (banned in Russia). Earlier, the Russian foreign Ministry said that the prolongation of the mandate of the CMP depends on whether he will be able to conduct a qualitative investigation of the incident in Khan Sheyhun.

29 June the OPCW published a report according to which on 4 April 2017 in the city of Khan shaykhun was sprayed sarin gas or a similar toxic gas. According to the defense Ministry of the Russian Federation, Syrian aircraft bombed militants of the shop, where they produced toxic chemicals. Washington accused Damascus of using chemical weapons, and then on the night of April 7, the U.S. Navy launched a missile attack on a Syrian military airfield in HOMS province. Last week the Director of the Department of foreign Affairs of the Russian Federation on non-proliferation and arms control Mikhail Ulyanov said that Russia is increasingly inclined to think that the chemical attack in Khan Sheyhun was the staging.