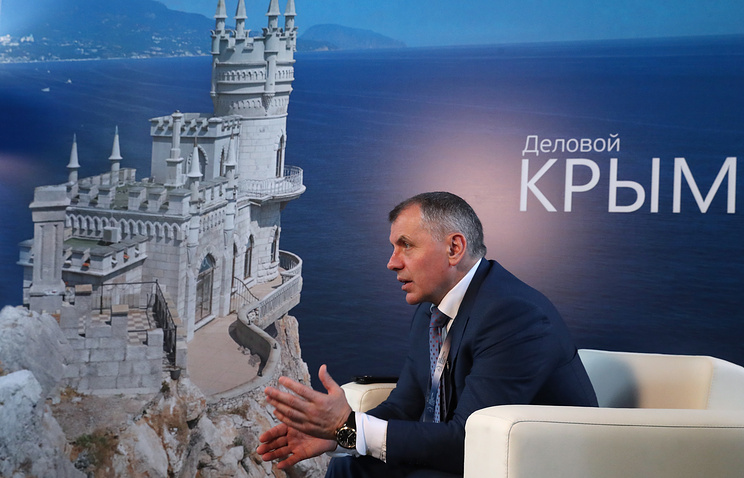 SIMFEROPOL, November 7. /TASS/. Chairman of the State Council of Crimea Vladimir Konstantinov supported the idea of the Deputy of the state Duma Konstantin Zatulin on the abolition of the decree of the Presidium of the Supreme Soviet of the USSR from 1954, in which the Crimean region of the RSFSR were transferred to the Ukrainian SSR. He said this to journalists on Tuesday.

On 6 November, during the “forum of friends of the Crimea”, the first Deputy Chairman of the Duma Committee on CIS Affairs, Eurasian integration and relations with compatriots Konstantin Zatulin said that the abolition of the Soviet acts 1954 to transfer the Crimea to the Ukrainian SSR would put an end to any claims to the Peninsula from the neighbouring States.

“Technically, all the necessary legal steps which were necessary for the occurrence [of Crimea] in Russia, we did. Nothing new to add is not required, but it [the possibility of cancellation of the act of 1954] has a political and symbolic. Cancellation [of the decree] as proof of illegality, it makes sense,” said Konstantinov.

According to him, this decision could be a symbol of recognition of past mistakes. “The point is the illegality of those actions, we also condemn and acknowledge the mistakes of the past, for example, that the repression of 1937. No one is hiding – it is our history. And you can recognize [the decision to transfer the Crimea to the Ukrainian SSR] mistake, thoughtless, inconsistent, and even then violate all the rules [the decision],” added the head of the Crimean Parliament.

He explained that the authorities of the Crimea have no authority to initiate repeal of this act, but such an initiative can leave deputies of the state Duma. “The deputies [of the Duma] from the Crimea unable to raise this question, to condemn this act accurately,” – says Konstantinov.

Transmission and the return of the Crimea

Crimea was transferred to the Ukrainian SSR in 1954 on the initiative of the first Secretary of the CPSU Central Committee Nikita Khrushchev. This was done in accordance with the decree of the Presidium of the USSR Supreme Soviet of 19 February 1954. In 2015, the Prosecutor General’s office explained that the decision of 1954 did not correspond to the Constitution of the RSFSR and the Constitution of the Soviet Union. In addition, as noted in the materials, the Presidium of the Supreme Soviet of the USSR did not have the relevant powers.

The Supreme Council of Crimea and the Sevastopol city Council due to the political crisis and change of power in Ukraine on 11 March 2014, adopted the Declaration of independence of the city of Sevastopol and the Autonomous Republic of Crimea. March 16, on the Peninsula held a referendum in which 96.77% of voters in Crimea and 95.6% of voters of Sevastopol voted for reunification with Russia. The turnout exceeded 80%. The agreement on the adoption of new constituent entities in the Russian Federation was signed on 18 March.