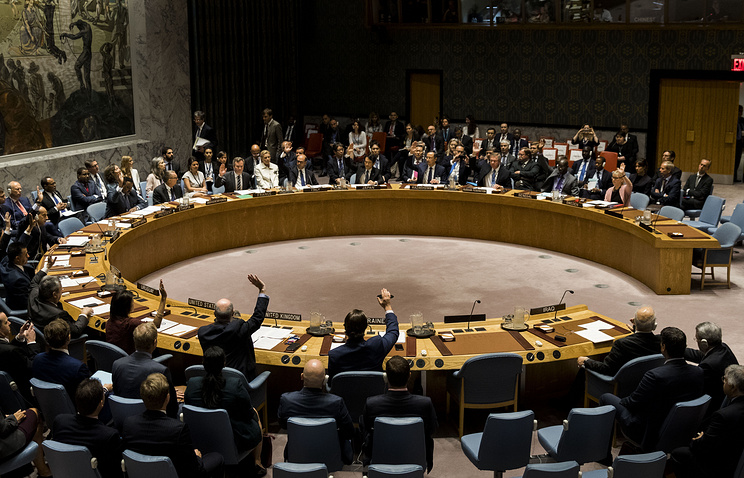 UN, November 8th. /TASS/. Russia supports the idea of expanding the UN Security Council through the inclusion of representatives of developing countries, however, strongly opposes any attempt to restrict the right of veto, which allows the permanent members of the security Council to block the resolution. This position was expressed by the representative of the Russian Federation Oleg Filimonov on the meeting of the General Assembly on the reform of the security Council.

“Russia as a permanent member of the Security Council noted the need to make this body more representative, primarily due to the developing States of Asia, Africa and Latin America. However, the efforts in this direction should not affect the Council’s ability to effectively and promptly respond to emerging challenges. In this context, we support the continued compact nature of the composition of the Security Council. The optimal numerical strength should not exceed much more than 20 [countries],” said the diplomat.

He also stressed that Russia’s “unacceptable any ideas that lead to infringing upon the prerogatives of the current permanent members of the security Council including the veto”. “It should be remembered that this Institute is an important factor that encourages Council members to search for balanced solutions. To encroach on it would be incorrect both historically and politically,” – said Filimonov.

The UN security Council does not meet the realities

With a call to expand the UN security Council without compromising its effectiveness was made by the GA counselor of the permanent mission of the UK, Stephen Hickey. He acknowledged that the current composition and size do not meet modern realities.

The diplomat recalled that at the first meeting of the security Council in 1946, at the table sat the representatives of 11 countries, and in 1965 the number had grown to 15, and since then remained unchanged. “In subsequent years the UN has grown, and the world has changed, but the Security Council was not able to stay on par with him. The main body responsible for the maintenance of peace and security, must present the world he is trying to protect,” said Hickey.

He called for a “modest expansion” in the number of permanent and temporary members of the security Council, proposing to include in its membership Brazil, Germany, India and Japan, as well as one African country. The diplomat also confirmed the readiness of London to the limitation of the veto, Recalling that his country did not use it for a whole generation. However, he noted that Russia since 2011, nine times blocked resolutions on Syria, “to prevent action against the vile regime that killed its own people with chemical weapons.”

With sharp criticism to address of Russia spoke of zampolpreda of Ukraine to the UN Yuriy Vitrenko, who claimed that the veto of Moscow did not allow the security Council to “quickly react” to the conflict in the Donbass, which led to the death of “thousands of people”. He suggested curtailing the veto power of the permanent members of the UN security Council “in cases of war crimes and foreign aggression”. According to him, the Council members should not have voting rights when considering the armed conflicts in which they are involved.

Intergovernmental negotiations on the reform of the security Council are conducted almost 10 years, but countries have not yet managed to agree on key issues, including the optimal composition of the UN security Council, the number of its permanent and temporary members, as well as the order of use of the veto. In recent years, actively discussed the proposals of Mexico and France, aimed at limiting the privileges of the five permanent members. While the UK supports this initiative, Russia, China and the United States refer to it negatively.

At the meeting of the UN General Assembly on Tuesday Filimonov noted that discussion on the reform of the UN security Council are “very difficult”. According to him, the approaches of the major players “are still significantly different from, sometimes diametrically,” and “a universal solution that would satisfy everyone has not seen”. He said that in this situation Russia sees no alternative to the continuation of “patient, step-by-step work to bring closer the negotiating positions,” and are willing “to consider any reasonable option for expansion of the Council”, including intermediate, compromise solution, if it will enjoy broad acceptance at the UN.

A meeting of the UN General Assembly on Tuesday became the first in a new annual cycle of discussions on the reform of the UN security Council. Opening the meeting, Chairman of the 72nd session of the GA, Miroslav Lajcak called on countries to listen to the inhabitants of the planet, which, according to him, are changes in the work of the UN. “We must remember that the UN Security Council is the organ responsible for the maintenance of international peace and security. Its decisions can be a matter of life and death. That is why the Security Council often gets into the headlines of world media,” he said.

According to him, after 10 years of inconclusive intergovernmental negotiations on Security Council reform time to start a “real dialogue” and “listen to each other”. “Without this, the process will turn into an empty Declaration statements that will be repeated is already known and unchanging position,” said lajčák. “We can start a dialogue, and you can do it today”, – said the Chairman of the General Assembly.