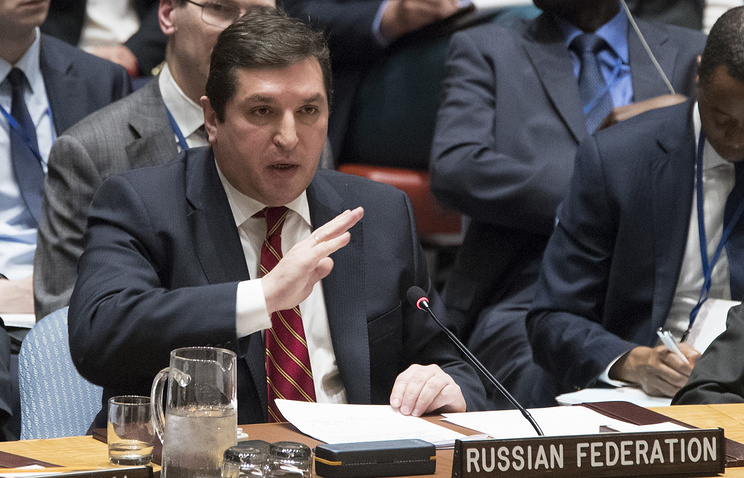 UN, November 8th. /TASS/. The results of the Commission, the UN and the OPCW investigation of chemical attacks in Syria does not stand up to scrutiny. This was stated on Tuesday by Deputy permanent representative to the UN Vladimir Safronkov at the meeting of the Security Council.

According to him, the results of the investigation “deeply disappointing”, and the experts ‘ report “of poor quality”. He stressed that the report, published on 26 October, and its findings “do not withstand scrutiny.”

As the diplomat stated, “there is reason to believe” that the incident in Khan Sheyhun April 4, which is responsible for investigators assigned to Damascus was staged by militants. Safronkov criticized the Joint UN and OPCW to investigate (CMP) chemical attacks, which, according to him, worked remotely and refused to visit the scene of the incident. He drew attention to the fact that section by Khan Sheyhun the report is replete with revolutions in the subjunctive mood.

Deputy permanent representative to the UN rejected the accusations of the USA and other Western countries that Moscow is trying to hinder the investigation of chemical attacks in Syria, offering to correct the work of the Commission of inquiry. “We are not undermining the authority of the CMP, and just deal with facts and arguments,” – said Safronov. According to him, the Russian side is convinced that the mechanism entrusted with a huge responsibility, “can not continue in this way.”

“Without radical restructuring it will remain a blind weapon to settle scores with the Syrian authorities. Now it is precisely this reputation. This is unacceptable,” the diplomat said. He assured that Russia, in preparing its version of the resolution on the extension of the term of the CMP sought to “increase its effectiveness and enhancement in accordance with the highest standards of the Convention on the prohibition of chemical weapons”.

The CMP’s mandate expires on 17 November. Previously, Russia vetoed the US prepared a resolution extending the mandate of the Commission of inquiry until November 2018, called to wait for the publication of its next report. It experts blamed the attack with sarin in Khan Sheyhun April 4 at the Syrian government, and after the attack in the village of Marat-Umm Hosh 16 September 2016 – the militants of the terrorist group “Islamic state” (banned in Russia).

November 2, Russia and the USA brought to the UN security Council a draft resolution on the extension of the term of the CMP. The documents provide for the extension of the mandate of the Commission of inquiry at different times: Russia – until may 16, 2018, and the us – in the 24 months since the adoption of the resolution. In the United States text contains the threat of action under Chapter VII of the UN Charter (allows for the imposition of sanctions and the use of military force). In turn, the Russian project requires CMP to re-evaluate “previously made findings and conclusions” in view of the fact that they carried out an investigation, according to Moscow, did not meet the standards. Earlier, the Russian foreign Ministry said the us draft resolution unacceptable.