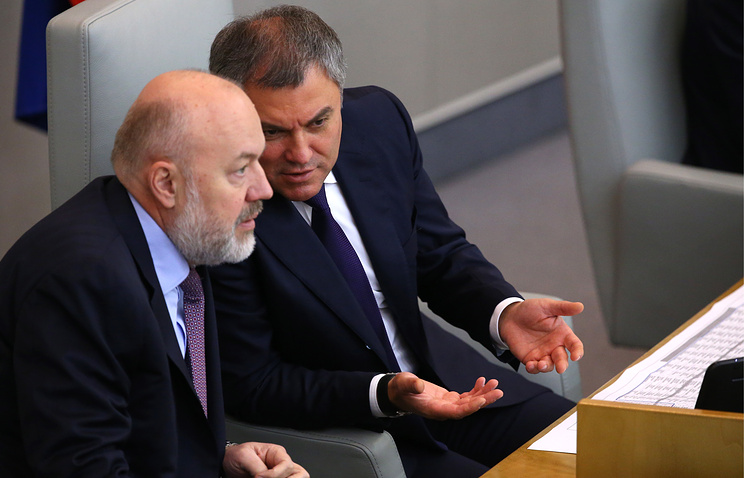 MOSCOW, 8 November. /TASS/. Chairman of the state Duma Vyacheslav Volodin and the head of the Committee on state building and legislation Pavel Krasheninnikov has made Wednesday to the Senate a bill that expands the possibility of using the state coat of arms, including informal. Information about this posted in the Duma’s electronic database.

As explained to journalists Krasheninnikov, the project will change “allowing the use of Russian arms, including his image, citizens, public associations, enterprises, institutions and organizations in other cases, except for those already fixed by law.” “The limits of such use are limited only to criminal offences under the article “violation of the state emblem of the Russian Federation or national flag of the Russian Federation”, – said the MP.

Thus, the initiative expands the possibility of using Russian arms and provides citizens and organizations the right to its informal use, said Krasheninnikov.

Currently, according to him, the use of the state coat of arms is possible only in cases specified by law. “If the state emblem is used in other cases and in ways not relevant to the rules of its official use, it may pursue administrative and criminal liability, – stated the politician. – In fact, the citizens and organizations do not have a legal possibility of informal use of the state emblem”.

In the case of the adoption of the document “citizens and organizations will be able to legally use state symbols, for example, mass public events, at carrying out of sports competitions, congresses of public organizations, in the production of Souvenirs and other occasions in everyday life in the manifestation of Patriotic feelings,” he listed Krasheninnikov. In his opinion, the adoption of the law “will promote the popularization of state symbols, citizenship education and patriotism.”