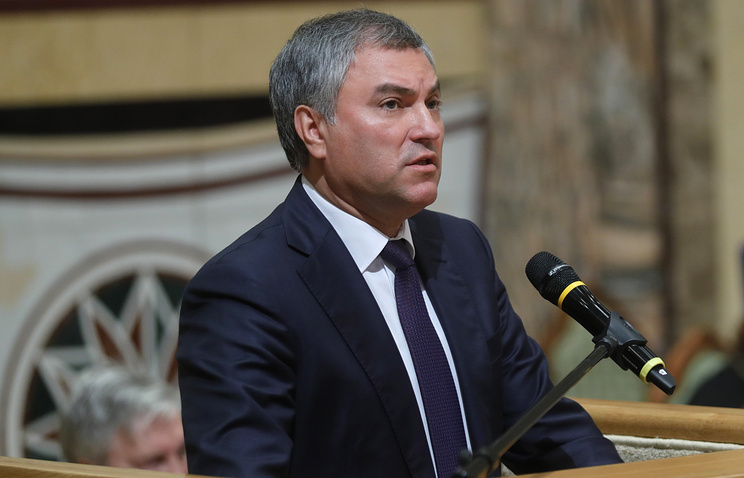 MOSCOW, November 10. /TASS/. Speaker of the state Duma Vyacheslav Volodin has instructed the profile committees of the lower house of Parliament to study the symmetrical and mirror response to the actions of the United States, where from the Russian TV company RT require registration as a foreign agent.

“As in the U.S. such decisions concerning our company are accepted, it would be right for us to respond to these actions… It would be right to charge to coordinate this work Vice-speaker Peter Tolstoy and to involve the Committee on information policy, on legislation, Committee on security”, – said Volodin in the discussion of the agenda of the plenary meeting. He also proposed to announce an unscheduled break from 12.00 to 13.00 MSK “with leaders of the Duma factions to discuss this question”.

Volodin explained that considers groundless the request of the US Department of justice, to RT to register as a foreign agent.

“That’s groundless. No specific claim is not brought against the channel, by the way, the same pressure is on the Russian news Agency Sputnik. It’s blatant government pressure the US exerted on Russian media, has spread to the Internet platform and social networks, not allowing our media to develop and increase audience,” said Friday Volodin.

The speaker concluded that “we need to give a symmetrical mirror response”.

The American media in Russia

Speaking about the mirror measures Volodin has reminded that in Russia there are dozens of us media and online platforms, which, in his words, “interfere in the internal Affairs of the Russian Federation”. “While these channels are funded directly or indirectly by the U.S. government,” said the Chairman of the lower house of Parliament.

He stressed that despite this, Russia has respected freedom of expression to all media operating in the territory of the Russian Federation. “You know that our” foreign agents ” law does not apply to media. U.S. law [on the contrary] plans to extend [their action] with respect to RT America and Sputnik Agency,” said speaker of the state Duma, noting that the mirror action must be taken to protect Russian citizens “from overt interference, which today launched the American media in Russia”.

“We didn’t go for it, although all the action of the American media talking about the fact that their policy and position is absolutely unfriendly, and intervention is absolutely blatant. As in the U.S., such decisions are made, it would be right for us to respond to these actions”, – said Volodin.