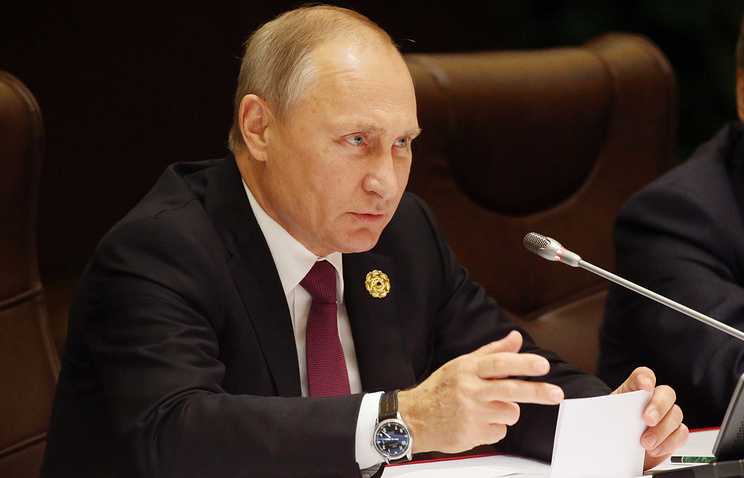 Da NANG /Vietnam/, November 11. /TASS/. The President of Russia Vladimir Putin believes that at this stage in Syria, the main thing – to create conditions for a political solution, as military operations to eliminate terrorists is completed.

“Today it is quite obvious is the fact that the military work to eliminate the hotbed of terrorism in Syria ends,” he said to journalists following the APEC summit. In his opinion, talking about it, the recent events in the South-East of the country.

Putin believes that “the main thing now is to complete this work and secure agreement on the areas of de-escalation, to consolidate the ceasefire and create conditions for a political process”.

The Russian leader stressed that “to this aim, including the joint Russian-American statement.”

“I think it will be a significant factor in efforts to resolve the Syrian issue”, – he added.

“I think it [the statement] is important because it underscores some of the absolutely fundamental things. First-the continued fight against terrorism, it is extremely important for the United States, especially in light of recent tragic events that occurred there in connection with terrorist attacks,” – said the head of state to journalists following the APEC summit.

In his opinion, “it’s important for us [Russia], for a country that has long been faced with this problem, it is important for the entire international community”.

“The fight against terrorism will continue, and, through joint efforts,” Putin said.

“As for Syria, it is extremely important that we have reaffirmed the territorial integrity and sovereignty of the country”, – said the Russian leader.

He said: “We have agreed that we will be after the completion of the fight against terror, after the elimination of the terrorist threat in this area to move to a political settlement under the auspices of the United Nations.”

Earlier, Putin and trump met at the APEC summit, endorsed the statement on the Syrian settlement.