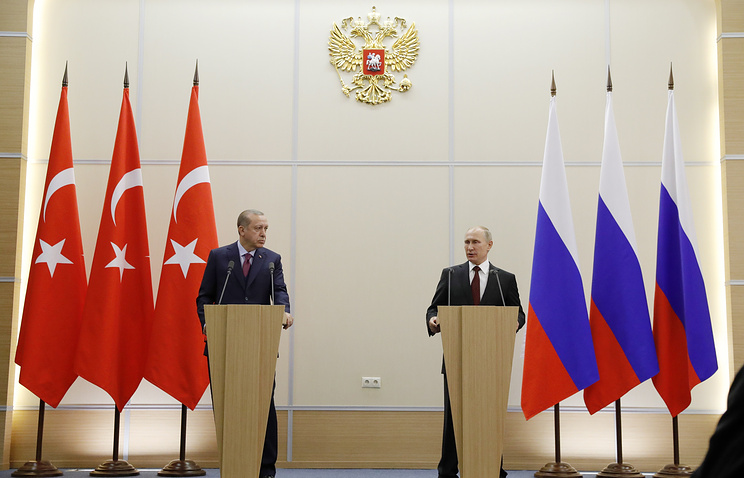 SOCHI, November 13. /TASS/. Russia and Turkey agree on the need to increase efforts to promote political settlement in Syria.

“Of course we discussed today and the problems of the Syrian settlement. On the background of achievements in the fight against terrorists, Mr. President [Recep Tayyip Erdogan] agree that it is necessary to increase efforts to promote long-term normalization in the country”, – said the President of Russia Vladimir Putin to journalists after talks with Erdogan.

Putin stressed that to strengthen efforts must be “primarily to promote a political settlement and to promote the Syrians in post-conflict reconstruction”.

The Russian President said that he had briefed Erdogan on the approval together with the President of the United States Donald trump’s statements on Syria during APEC summit in Vietnam (November 10-11). He listed the main points of the document: “the final blow to the ISIL [terrorist group banned in Russia], strictly to ensure the sovereignty, unity and territorial integrity of the Syrian state”.

“I told the President about the results of his recent visit to Tehran, about the meetings with the Iranian leadership,” – said the Russian leader. “In this regard, I would like to note with satisfaction that our cooperation with Turkey and Iran to work as the countries-guarantors of the Astana process continues to yield concrete results,” – said Putin. According to him, “the level of violence clearly decreased, creates favorable conditions for promoting inter-Syrian dialogue under the auspices of the UN.”

Erdogan also noted that the level of violence in Syria has decreased due to talks in Astana and the establishment of zones of de-escalation, and there ground for a political solution to the conflict in the region.

“The Astana meeting, and a Memorandum by [zone] de-escalation, we believe, contributed to the reduction of violence in the region. We agreed that at the moment there ground, [in order] to focus on the political resolution of the issue,” he said.

Erdogan added that the statement on the Syrian settlement, adopted during the APEC summit in Vietnam Vladimir Putin together with the President of the United States Donald trump, “also is given a value”. The document says that Putin and the tramp “agreed that the conflict in Syria has no military solution, and they confirmed that the final political settlement of the conflict must be found within the framework of the Geneva process in accordance with Security Council resolution UN 2254”.

From the beginning of may in Syria created four zones of de-escalation, an agreement was reached in Astana by the representatives of Russia, Iran and Turkey. In mid-September, the guarantor countries announced the operation of all zones. Three of them, which had operated in Eastern ghouta (suburb of Damascus), in the province of Deraa and the city of HOMS, added a fourth area, which included Idlib province and parts of neighboring provinces of Aleppo, Latakia and Hama.