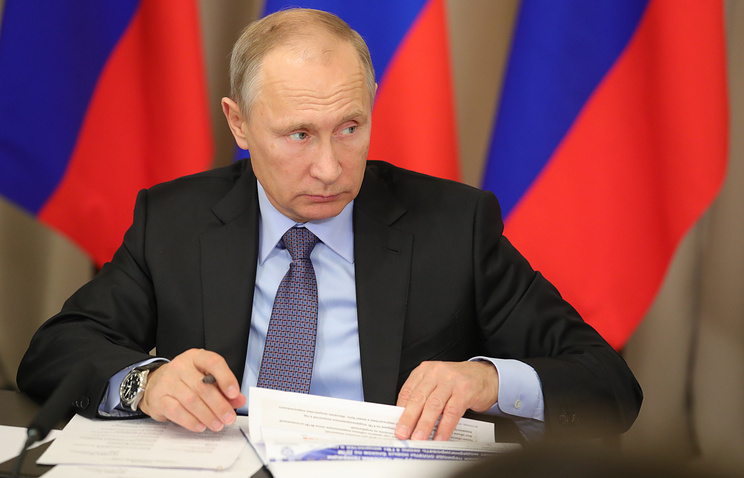 MOSCOW, November 15. /TASS/. Russian President Vladimir Putin signed a decree on the assessment of efficiency of activity of Executive authorities of constituent entities of the Russian Federation. The document is available on the official portal of legal information.

The decree approved the list of indicators to assess the effectiveness of the regional authorities and heads of subjects prescribed annually by 1 October of the year to submit to the government reports on achieved values of indicators for an estimation of efficiency of activity of Executive authorities and their planned values on a three-year period.

The government is mandated to approve methods of calculation of indicators, and to submit to the President annually, before November 1, report on evaluation of efficiency of activity of authorities of regions.

In addition, Putin has instructed to represent him until March 1, 2018, the draft presidential decree on the assessment of efficiency of activity of heads of Federal Executive authorities on creation of favorable conditions for business activities.

Will report what regions?

The list of indicators for assessing the performance of authorities of subjects of the Federation includes 24 of the item.

These include life expectancy at birth, the dynamics of the real average monthly wage, the ratio of per capita monetary incomes of the population minus the amount of required payments and payment of utility bills to the cost of a fixed set of basic consumer goods and services, as well as the proportion of the population with incomes below the subsistence minimum. Will be recorded and indicators such as the housing affordability index, which is calculated as the number of years needed for the family of three people for the purchase of the apartment is 54 square metres, with the average annual total cash income of the family.

Impact on the assessment of efficiency will have a rate of migration growth in the region, total fertility rate, crime rate, quality and affordability of housing services. More attention will be paid to the dynamics of GRP per capita, investment in fixed capital, an index of subject of the Russian Federation in the national rating of investment climate.

Heads of regions have to report the density of the road network, the volume of tax revenues of the consolidated budget of the subject on the percentage of overdue accounts receivable and the level of unemployment.

Is in the list of such criteria, which should give the population of the region. In particular, it concerns the conditions for self-realization, including children, satisfaction with services in the areas of education, health, culture, social services, activities of the authorities and also the share of residents confronted with manifestations of corruption.