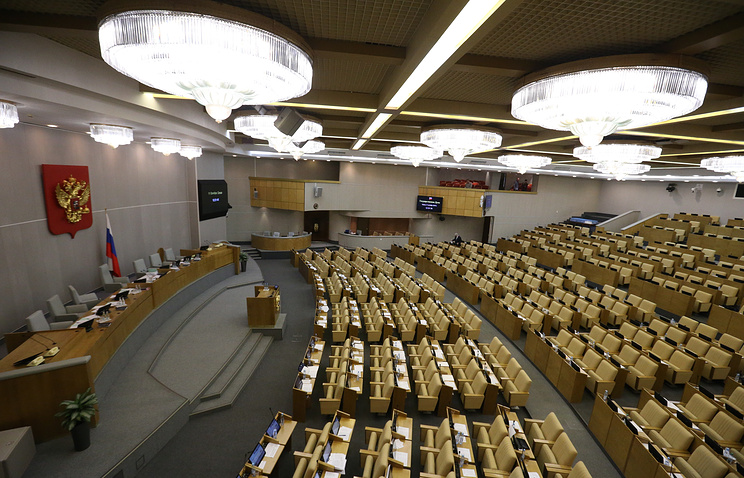 MOSCOW, November 15. /TASS/. The state Duma meeting on Wednesday voted to adopt amendments that will recognize the media as a foreign agent if it receives funding from abroad. After the acquisition of this status on the media will be subject to the restrictions and obligations set now for – profit organizations- foreign agents; they also will face the same for these NGOs responsible for the violation of the law.

For the adoption of the amendment voted 409 of 450 MPs who opposed or abstentions were not. The adjustment made in the second reading of the bill, which was initially addressed a different, albeit close to the topic: the possibility of pre-trial blocking of sites is prohibited in Russia organizations. The decision of the house was a response to the request of the US Department of justice, to RT America – the American branch of the Russian broadcaster to register as invagent.

“The new design for domestic law”

As explained by the head of profile state Duma Committee on information policy, information technologies and communications Leonid Levin, the lower house adopted an amendment is “prepared in a short time a response to the hostile actions of the USA against Russian media outlets operating in their territory”.

“Earlier, the President of our country emphasized that our side will necessarily mirror measures taken, the leaders of all the Duma factions have signed this amendment, clearly setting out the significance of this decision for all of us and our unity in the defense of national interests”. the MP said. Levin noted that, according to the initiative, “the competent authorities taking into account the legislation and modern technology can take over American resources advocacy measures similar to the restrictions which apply at present in the US for RT and Sputnik”. “This amendment can be applied in case of repetition of such events in other countries”, – warned the Deputy.

He stressed that the adoption of the amendments on the media-registered as a foreign agent due to the situation, which was created by the United States, and expressed confidence that Russia’s policy in relation to freedom of speech and principles of journalists ‘ work will not change. “This bill is an exceptional measure, mirroring the use of the American side of his act, registered as a foreign agent in order to deal with RT and Sputnik, reputable overseas suppliers a unique information which is not obtainable from the Central American media,” said Levin.

In his view, the US has applied the law selectively to the Russian media, “in order to create maximum difficulty for the effective operation… with the aim of limiting free competition in the media market”. “Domestic legislation is fundamentally different from the American, therefore the proposed amendment is prepared in such a way that, remaining in the Russian legal field and without creating any obstacles to the freedom of speech, to ensure that the reflectivity of the measures relative to the United States,” he explained.

“For the first time in domestic practice, introduces the possibility of registration of foreign media as inherent. This is a new design for the domestic legislation, but so accurately reproduces the actions of the American side in the attitude of our broadcasters,” said Levin.

“I want to Express the hope that the application of this law will be single”, – said the Deputy. According to him, the need to “do everything possible so that such political situations do not recur and similar retaliation [by Russia] never took”.

The essence of the amendments

The amendment was prepared the entire leadership of the lower house of Parliament, including the President and heads of certain committees of the state Duma.

According to the document, a legal entity registered abroad or a foreign structure without forming a legal entity, which is engaged in the dissemination of information, can recognize foreign media – foreign agent in case of receipt of money or other property from abroad.