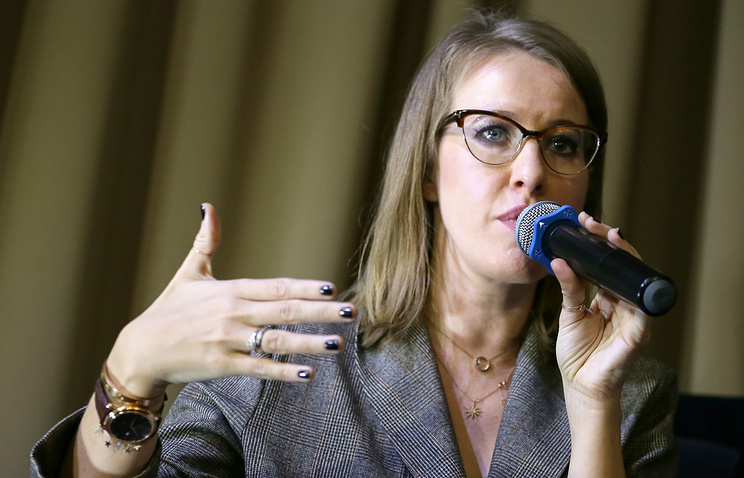 MOSCOW, November 17. /TASS/. TV presenter Ksenia Sobchak, have expressed a desire to participate in presidential elections of the Russian Federation from party “Civil initiative”, launched a series of panel discussions devoted to the problematic issues of Russian life. The first round table, held at the headquarters of Sobchak, devoted to the issues of inclusive society and problems of psychoneurological boarding schools (PNI).

“We are opening a series of expert discussions on the most important topics which then become part of our political platform. We will talk about those things, about the problems in society that we consider important to address at the state level”, – said Sobchak.

In her opinion, Russia has yet to create an inclusive society. “This is a huge problem in our country today, we only generated the principles, develop a kind of road map that the society could appear. All those provisions and all questions to the state that will be performed today, will be part of our program,” – said TV presenter.

She said that during her campaign wants to launch a public debate on important issues. Now, according to Sobchak, the main topic for all presidential candidates is the question of “Crimea is ours or not ours?”.

The lessons of kindness and created barriers

The founder of Fund “Exit”, which deals with issues of autism, writer and Director Avdotya Smirnova noted that in Russia the parents of the children often resist the emergence of a special child in the class. “These children have no barriers, these barriers create we adults”, she said.

Smirnov reported that in Russia today, about 150 thousand people are in STUMPS. “These are our countrymen, fellow citizens, who live actually in prison with the use of heavy psychotropic substances”, – she said.

Natalia Belogolovtsev, who along with her husband, TV presenter Sergey Belogolovtsev founded the project “Skis dreams” for the rehabilitation and socialization of children and adults with cerebral palsy, autism, down syndrome and other special needs with the help of skiing, drew attention to the problem of social dependency.

“All these payments to parents [special children], all free – this leads to the psychology of apathy and seriousness. People become accustomed to the consumer way of life, teach it to your kids, it’s for any child is terrible, but for a child with special even more scary,” she said.

“If you always go with mom and you don’t take the job, you will remain infantile”, she said.

According to Belogolovtsev, the state should study and adopt the practices of charity organizations in the field of assistance and rehabilitation of people with disabilities. “Need a time to sit down and review all of the approaches,” she said.

Belogolovtsev, whose son has features of development, believes that “the problem is not that people with disabilities are not in the information field all”, and that “they are not as equal.” She believes that people with special needs, like all the others, “have the right to be absurd, ridiculous, they can just funny to fall over them, too, can laugh.”

The organizer of the movement “Stop KICK” Maria Sineva drew attention to the problem of employment of people with intact intellect, but standing on the account in a psychoneurological clinic. She believes that it is necessary “to make jobs that have been declared to be disabled, were real jobs, not imaginary”. Sineva recalled that every year the government allocates funds for the employment of disabled persons.

Presidential elections will be held in March 2018. The official campaign should start in the period from 7 to 17 December, after the election appointed by the Federation Council. The desire to participate in the presidential campaign is already stated including the leader of LDPR Vladimir Zhirinovsky, the founder of the party “Yabloko” Grigory Yavlinsky, head of the “Communists of Russia” Maxim suraykin, singer and human rights activist Catherine Gordon and blogger Alexei Navalny. The head of the Central election Commission Ella Pamfilova explained that the Bulk can not be a presidential candidate in the upcoming elections because of the criminal record.

Communist party leader Gennady Zyuganov has repeatedly stated that the Communist party goes on elections of the President of the team, and who will be the candidate, will be determined at the Congress in late December. “United Russia” and “Fair Russia” has not yet announced the format of its participation in the presidential campaign.