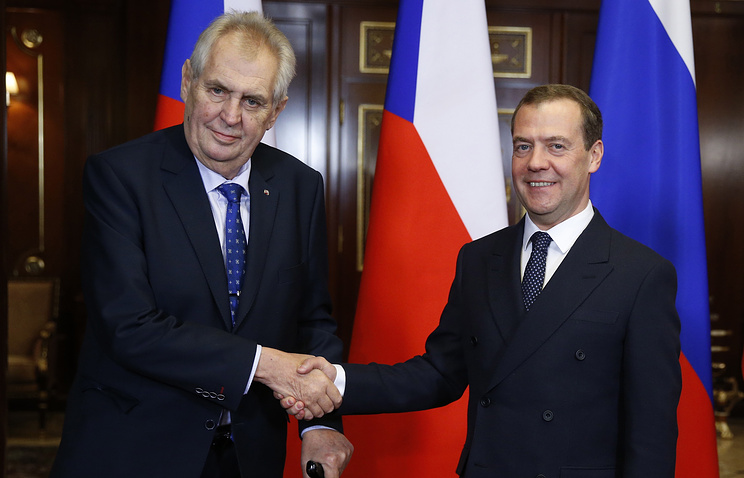 GORKI, November 22. /TASS/. Czech President Milos Zeman said today at a meeting with Russian Prime Minister Dmitry Medvedev on the wrong interpretation of the events of 1968 in Czechoslovakia in the publication of one of the Russian media. The Prime Minister assured the Czech leader in that similar reports in the press have nothing to do with the official position of Moscow in relation to these events.

At the beginning of the meeting with Medvedev Zeman handed him a copy of the article, expressing regret that “this is not such a nice gift as they usually are”. He noted that due to the publication even received an offer to cancel the visit to Russia. “I think it would be a nonsense,” he said.

As noted by the President of the Czech Republic, this article includes passages that “Soviet occupation (in 1968) was not occupation,” and that “we [Czechoslovakia] during the second world war as an independent state, supplied Germany with weapons, although we were occupied by Germany”. Zeman questioned the fact that the author is a historian, and called the publication “a complete nonsense”.

Medvedev, noting that in Russia proclaim the principle of non-interference in the activities of the media, stressed that the publication “does not reflect the official positions of our country”. “You rightly said it is the publication of the individual. In this opus is written, “the opinion of citizen expressed in the publication, is its personal position and does not coincide with editorial opinion”, – said the head of the Russian government.

The Prime Minister stressed that the official position of Russia on these events “were formulated in 1993, at a time when they formulated and signed the Treaty between our countries.” Medvedev called on the Czech side of “be borne in mind, first of all, the official position of the Russian Federation, its President, Chairman of the government”. “Make no mistake, nothing to do with the author [of the article], we do not have”, – assured Medvedev, agreeing that the release of this publication does not improve the atmosphere during the visit of the Czech delegation to Russia.

As mentioned by Zeman

On the website of the TV channel “Zvezda” published an article by Leonid Maslovsky “Czechoslovakia should be grateful to the USSR for 1968: a history of the “Prague spring”. In the commentary edition of this publication noted that “the website “Stars” – a discussion platform on which to place different opinions.” In particular, in the “Articles” section contains another perspective on these events the author Dmitry Sergeev.

In the comments of the editorial Board stresses that the materials in this category are purely technical correction and are placed as personal position of the author that is indicated in the text. “Traditionally, informing about the development of cooperation between Russia and other countries, including the Czech Republic, the editorial Board expects to further strengthen relations between the two countries,” – said in comments.