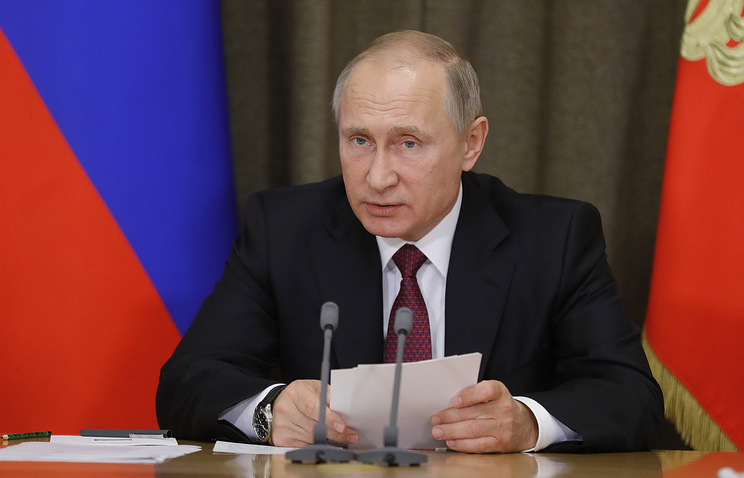 SOCHI, November 22. /TASS/. Large-scale military operations against terrorists ends, thanks to the efforts of Russia, Iran, Turkey managed to prevent the collapse of Syria. This was stated by Russian President Vladimir Putin, opening the trilateral meeting of Russia, Turkey and Iran.

“Large-scale military operations against the terrorist gangs in Syria are completed, he said. – Note that thanks to the efforts of Russia, Iran and Turkey managed to prevent the collapse of Syria, to prevent its capture international terrorists, to avoid a humanitarian disaster”.

The Russian leader stated that the rebels in Syria really dealt a decisive blow, and “there is a real chance to put an end to years of civil war.”

Putin thanked his counterpart for accepting the invitation and arrived in Sochi to discuss further joint work on the Syrian track.

The talks in Astana

Putin noted the special role of the presidents of Turkey and Iran Recep Tayyip Erdogan and Hassan Rouhani in Astana the process without their participation a political settlement in Syria would be impossible.

“Less than a year ago, we initiated the launch of the Astana process, took the responsibility to guarantee the implementation of agreements, contribute to the promotion of inter-Syrian dialogue under the auspices of the UN, he said. – I want to note a special role of the President of Turkey and the President of Iran. If not for your position, the Astana process simply would not exist, there would be a cessation of hostilities, there would be no cease-fire would not create areas of de-escalation”.

Putin noted that in Astana for the first time at the same table managed to gather representatives of the government and the armed opposition. The Russian leader also noted that in the first seven rounds of meetings adopted and implemented fateful for Syria solution: cease of hostilities, set up and operate four zones of de-escalation in key areas of the country.

The Congress of national dialogue

Putin hopes that Russia, Iran and Turkey will spare no effort for the effectiveness of the Congress of national dialogue.

“The Syrian people will decide their own future, to agree the principles of government. It is obvious that the reform process will be difficult and will require compromises and concessions by all parties, including the government of Syria. I hope that Russia, Iran and Turkey will make every effort to make this work as productive as possible,” – said the Russian leader.

In addition, Putin proposed to consider the joint development of the comprehensive program of reconstruction of Syria.

“Given the huge scale of destruction, it would be possible to think together about developing a long-term comprehensive program of revival of Syria”, – said the President of the Russian Federation.

Putin expressed confidence that the success of the forthcoming reforms will largely depend on the decision socially-economic problems of Syria, to restore the industry, agriculture, infrastructure, health and education. According to him, no less important is the humanitarian aspect, including targeted assistance to the population, demining of the liberated territories, assisting in refugee return. Putin noted that after the creation of the zones of de-escalation, thousands of refugees have begun to return to their homes.

Speaking of making a complex program of revival of Syria, the Russian leader said that experts from Russia, Turkey and Iran have carried out serious preparatory work on the content of the negotiations. “So I’m sure the discussion will be substantive and productive, and the agreements will serve the further restoration of peace and security in Syria, strengthening its sovereignty, unity and territorial integrity, will promote stabilization of the situation in the middle East,” concluded the Russian head of state.

Russia, Turkey and Iran need to focus on long-term normalization in Syria and reconstruction of the country in the post-war stage, said the Russian President.

“It’s safe to say that we have approached a new stage, opening the opportunity to start real political settlement process, Putin said. – I believe that our efforts should be focused on ensuring long-term normalization in Syria, first of all, referring to the process of political settlement with the finalization of these negotiations in the framework of the Geneva process and to facilitate the reconstruction of the country in the post-conflict period”.

The Russian President stressed that the meeting aimed at solving this task. According to him, the participants will discuss further joint steps to consolidate and build on the recent positive developments in Syria. Putin added that the trilateral meeting will exchange views on how to give a strong impetus to the political settlement based on resolution 2254 of the UN security Council. He recalled that this document provides for launching a wide inter-Syrian dialogue with participation of all the ethnic, religious and political groups.