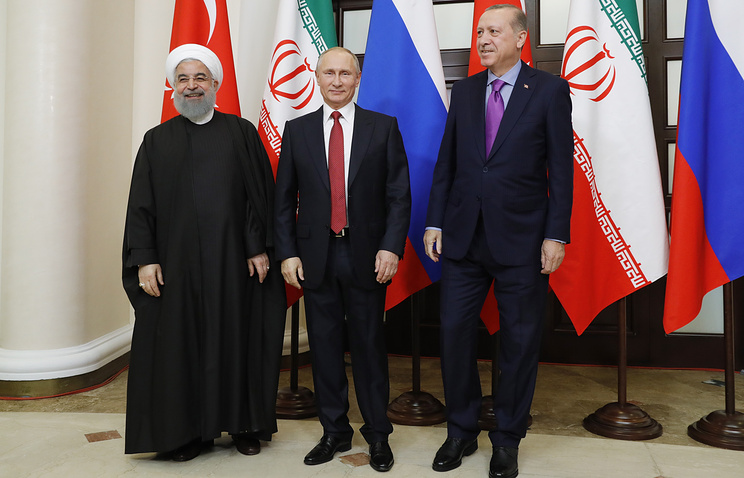 SOCHI, November 22. /TASS/. Russia, Iran and Turkey adopted a joint Declaration, which specifies priority areas of cooperation between the three countries on Syria. This was stated by Russian President Vladimir Putin on the results of negotiations with President of Iran Hassan Rouhani and Turkish President Recep Tayyip Erdogan.

“The document identifies priority areas of further cooperation between Russia, Turkey, Iran, playing a leading role in Syrian Affairs, and set specific objectives for the future,” said the Russian head of state to journalists after a trilateral summit.

Summing up the summit, Putin noted that three of the President “noted with satisfaction significant progress of the joint fight against terrorism, reaffirmed their readiness to intensify cooperation for the final destruction of ISIL, “al-Nusra Dzhebhat” [the terrorist group banned in Russia], and other extremist groups”.

“We agree, success on the battlefield, approaching the release of militants throughout Syrian territory and opened a qualitatively new stage in the settlement of the crisis in General, having in mind a real prospect of achieving long-term, comprehensive normalization in Syria and the political reconstruction of the country post-conflict,” – said the Russian President.

According to him, “this is what focused the agreed after talks joint statement”.

Social and economic reconstruction of Syria

According to the Russian President, the issues of socio-economic reconstruction of Syria will take a lot of work.

Putin recalled that this topic was discussed at the summit, Russia, Iran and Turkey.

“During today’s negotiations, we have not ignored the question of socio-economic recovery of Syria. Have much work to do, in fact, to help the Syrians to re-build the infrastructure, to revive the industry, agriculture, trade, re-access social facilities – hospitals, schools, kindergartens,” – said Putin.

The Russian President also stressed that “fundamentally important to significantly increase the volume of humanitarian assistance to the population, to completely demine the territory of Syria, to preserve the historical and cultural heritage”. According to him, during the negotiations the parties agreed “to do everything possible to encourage the engagement of other States, regional and international organizations.”

In conclusion, Putin expressed hope that the agreements reached at the recent tripartite talks “will help to really speed up the process of peaceful settlement in Syria, will reduce the risks of new conflicts, exacerbation of ethnic and religious warfare, and, consequently, will have a positive impact on the situation in the middle East”.

The Congress of national dialogue Syria

The leaders of the three countries also agreed to study the issue of the timing and composition of holding in Sochi of the Congress of national dialogue in Syria.

“I am pleased to note that the presidents of Iran and Turkey supported the initiative to convene a Syrian forum of the Congress of national dialogue in Syria. We agreed to hold this important event at the appropriate level, to ensure participation of wide segments of Syrian society, instructed the foreign Ministry, representatives of the special services and defense agencies to consider further the question of the composition and dates of the Congress here in Sochi,” – said the Russian leader.

According to Putin, are scheduled to gather at the table of negotiations, delegates from various Syrian political parties, domestic and external opposition, ethnic and religious groups. “The Congress will consider key issues of the national agenda for Syria, primarily related to the development of the future state structure, the adoption of a new Constitution, holding on to her through elections supervised by the United Nations”, – said the President of the Russian Federation. As a result, continued the head of the Russian state, will have an incentive to renewed efforts on the Syrian conflict settlement within the framework of the Geneva process. “Again, the fate of Syria must be determined by the Syrians as supporters of the current government and the opposition”, – concluded Putin.

Putin noted that he was pleased with the meeting, Rouhani and Erdogan.

“We with the President of Iran Mr. Rouhani and Turkish President Mr. Erdogan made a very in-depth talks on Syria that were held in constructive and business-like,” said the Russian head of state to journalists at the summit.

According to the Russian leader, the presidents “discussed the main aspects of the Syrian settlement, agreed to continue to dedicate all its efforts to solve the main tasks – establishing peace and stability in this country, preserving its sovereignty, unity and territorial integrity.”

Putin also stressed: “We have agreed to promote the interaction of the three States in Astana a format that has already proved its efficiency and contributed to a significant reduction in the level of violence in Syria, creating conditions for the return of refugees and internally displaced persons.”