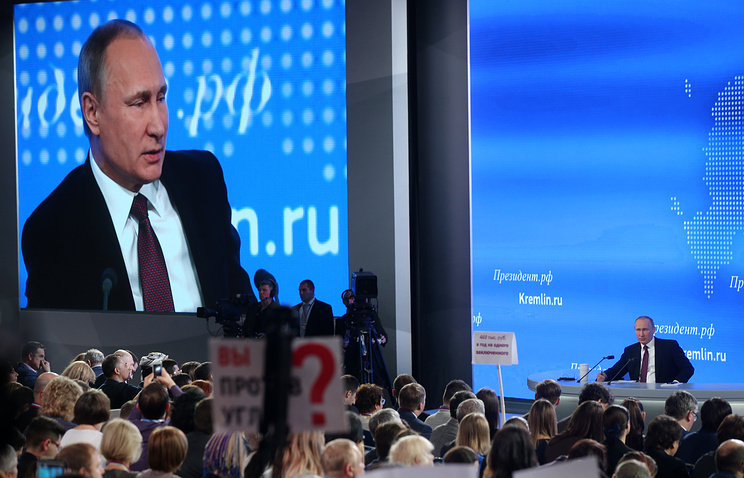 MOSCOW, December 8. /TASS/. A record number of journalists – 1 thousand 640 – accredited to the big press conference of Russian President Vladimir Putin on December 14. The venue of the press conference, as in past years, will be the world trade Center on Krasnopresnenskaya embankment.

On the Kremlin website published a list of past accreditation. Most of it belongs to the representatives of the regional Russian press. Of considerable interest, judging by the document, shown to the meeting with the head of state and foreign media from the United States, Germany, Japan, France, China, Poland, and Estonia.

In the past accreditation number 1259 (list in alphabetical order) appears Ksenia Sobchak, which represents the TV channel “Rain”. Earlier, the TV presenter has declared his intention to run for President of the Russian Federation on elections of 2018. Sobchak visited twice on a press-conferences Putin in 2014 and 2015.

The TV channel “Rain” in October, Sobchak said that recently met with Putin, when he recorded with the President an interview for the film about her father Anatoly Sobchak. She stressed that at that time she had decided to run, and informed the head of state. According to Sobchak, Putin noted that everyone has the right to make their own decisions and to bear for them responsibility.

Also on the list of Tatyana Shadrina (Felgenhauer), representing the radio station “Echo of Moscow”. In October she was attacked by an Israeli citizen. Commenting on the incident, Putin noted that it is irrelevant to media freedom in Russia.

Place of the meeting and its format

All accredited has received a personal message from the press service of the Kremlin, which referred to the place and time of the press conference. “The press conference will be held December 14, 2017 at 12:00 (GMT) in the world trade Center, located at the address: Moscow, Krasnopresnenskaya nab., 12,” reads the email. It clarifies that the entrance to ITC will be open from 08:30 GMT and will end at 11:00 GMT.

For Putin, the upcoming big press conference will be the last meeting with the media in this format during the current stay on the main state office and the 13th in a row. December 6, Putin announced that he will run on the main state post in elections in March 2018.

Since 2001, Putin met with journalists in this format annually. The break was made only for the period when he was Prime Minister from may 2008 to may 2012. However, after the election of the head of state for a six-year term in 2012, he resumed the practice of holding large press conferences.

The first seven press conferences Putin took place in the 14th corps of the Kremlin. After closing the communication of the President with the press was conducted in world trade Centre on Krasnopresnenskaya embankment.

The shortest time is 1 hour and 33 minutes – was the first meeting with journalists in 2001. The longest was the press conference of 2008, when Putin answered questions for 4 hours and 40 minutes.

In recent years, the scale of Putin’s meeting with journalists held in December and actually summarize. The President does not restrict the press nor on the topics of questions asked or time of communication, however, priority is given to the Russian media, and regional.

The live broadcast of the press conference will carry the TV channels “Russia 1” “Russia-24” and the First channel and the radio station “Mayak”, “Vesti FM”and “Radio of Russia”. Sign language will be implemented in a live TV channel “Russian Public television” (OTR), and OTR.