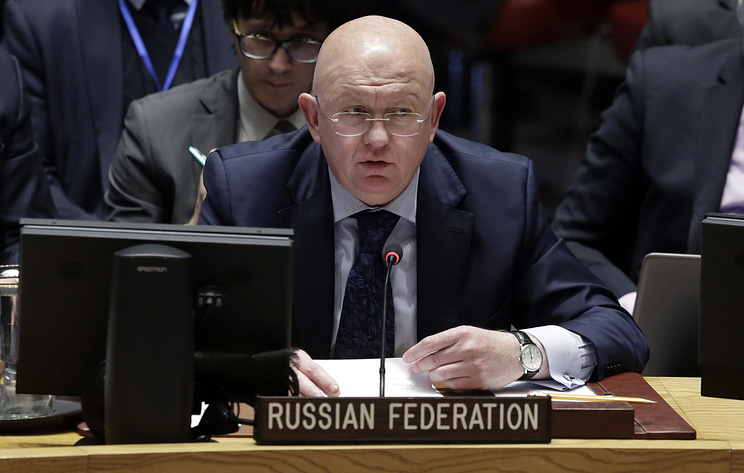 UN 8 Dec. /TASS/. Russia calls urgent to restart “a meaningful political process” aimed at resolving the Palestinian-Israeli conflict through the creation of separate States for two peoples. This was stated on Friday, Russia’s permanent representative to the UN, Vasily Nebenzia at the Security Council meeting held in conjunction with the U.S. decision on recognition of Jerusalem as Israel’s capital.

As reported nebesa, Moscow is concerned that Washington’s move “risks further complicate the situation in Palestinian-Israeli relations and the region as a whole.” “We believe that a just and viable solution to the chronic Palestinian-Israeli conflict must be achieved on a known international legal basis, including relevant resolutions of the Security Council and the UN General Assembly, which provide for the settlement of all aspects of the final status of the Palestinian territories, including such sensitive issue as Jerusalem, in the course of direct Palestinian-Israeli talks,” the diplomat said.

According to him, “in the current environment is more urgent than ever to restarting a meaningful political process aimed at achieving a final and sustainable Palestinian-Israeli settlement based on a two-state solution”. He stressed that “in this sense, the Quartet of international mediators remains unique mediation mechanism”.

Vasily Nebenzia noted that the Russian side has approached US with a request to substantiate its decision on the recognition of Jerusalem as Israel’s capital, as well as “explain the consequences” of this step for the efforts that are underway under UN auspices and within the framework of the Quartet. In addition, he said, Moscow has attracted the attention of Washington to the concerns of countries in the region that this unilateral move “could undermine and even to put a cross” in the negotiations on the establishment of two States.

Nebesa noted that the Security Council may hold another meeting in Jerusalem in the coming days. “I think today is not the end of the story. I think we should await the outcome of the summit of Islamic States, which will be held in the coming days, and, quite possibly, we will see another meeting of the Security Council, where, perhaps, someone will offer some solutions,” – said the diplomat.

Earlier, the permanent observer of Palestine to the UN Riyad Mansour said that it expects the Security Council to adopt a resolution that confirms the special status of Jerusalem and call upon the US to lift the decision declaring the city Israel’s capital. According to him, clarity on possible next steps in the UN will come after the consultations in the Arab and Muslim countries, which will be held in the coming days.

On Wednesday, the US President, Donald trump declared that the time has come to recognize Jerusalem as the capital of the Jewish state and ordered to relocate the U.S. Embassy. The status of Jerusalem is one of the key problems in Palestinian-Israeli conflict. The Israelis insist that Jerusalem is “one and indivisible” capital of Israel, the Palestinians want to make East part of the city is the capital of the state. According to the resolutions of the Security Council and the General Assembly, the question of the status of the ancient city should be resolved through direct negotiations between the conflicting parties.

The decision of the trump caused the riots. On Friday, thousands of Palestinians involved in protests in different parts of the West Bank of the Jordan river and the Gaza strip. According to Arab media reports, about 200 of them were injured, one person was killed.

The United States blame the UN

On Friday, the UN Security Council held an emergency meeting to discuss this unilateral step by the us administration. During the discussion, US Ambassador Nikki Haley tried to justify this decision to Washington, stating that Jerusalem historically served as “home” for the Jewish people. However, she argued that the United States remains “committed to the process of peaceful settlement” of the Palestinian-Israeli conflict, laying the blame for the lack of progress in it on the UN.

“For many years the United Nations was one of the epicenters of hostility towards Israel. The UN has done much more harm to prospects for peace in the middle East than contributed to this. We won’t have to do with this,” said Haley. She also noted that the U.S. “will not stand in the way”, when Israel will be subjected to “unfair attacks” and “will not be lectured by other countries,” which, she said, is a biased position on this issue.

Commenting on the tirade American colleagues, Vasily Nebenzia recommended that the U.S. take into account the opinion of other countries. “The US has assumed the role of first violin in attempts to reach a Palestinian-Israeli settlement, and if the United States will not take into account the opinion of other countries that have this process in a direct or indirect relationship, of course, they did not succeed”, – said the permanent representative of the Russian Federation. According to him, on Friday the meeting “confirmed that virtually the entire international community” perceives Washington’s decision “with great caution”, and with obvious conviction. As said by the diplomat, the countries – UN members “understand that this is a unilateral decision on the recognition of Jerusalem as the capital of Israel and the transfer of the Embassy could deal a serious blow to the peace process.”

The long speech at the meeting, said the permanent observer of Palestine to the UN Riyad Mansour, who called on the UN security Council to overturn the decision of the United States, and acknowledge the special status of Jerusalem. In turn, the Ambassador of Ukraine Vladimir elchenko was limited to 30-second speech, which consisted of only two sentences.

As said by the diplomat in Kiev are convinced that the question of the status of Jerusalem should be resolved “only through negotiations and in accordance with Security Council resolutions”. He also urged the UN and the Quartet of middle East mediators, composed of the world organization, the EU, Russia and the United States, “to redouble efforts aimed at resuming negotiations and achieving progress in the middle East peace process.”