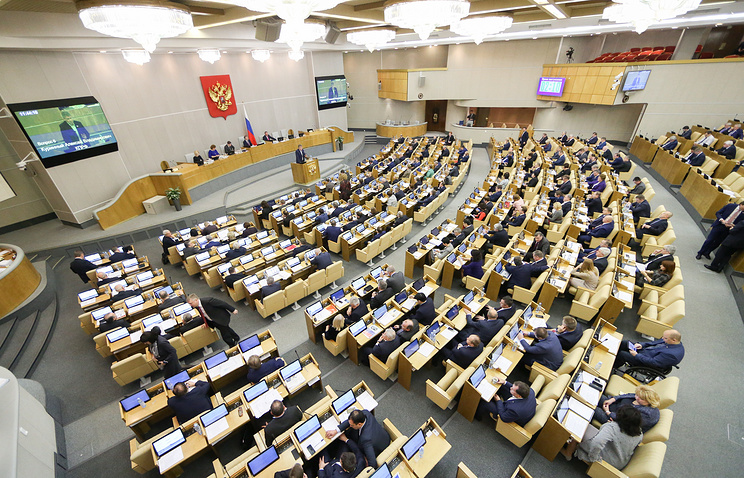 MOSCOW, December 14. /TASS/. The state Duma at the additional meeting on Thursday adopted in the third final reading a bill toughening criminal liability for recruitment into the ranks of the terrorists up to life imprisonment. The author of the initiative made by the first Deputy head of the faction “United Russia”, Adalbi Shhagoshev.

The law increases the liability for financing of terrorism, as well as for the declination, recruitment or other involving of the person in the Commission of at least one of the crimes provided by articles of the Criminal code on terrorism. These crimes will now be punished by deprivation of liberty for a term from 8 to 20 years with a fine in the amount from 300 thousand to 700 thousand rubles or imprisonment for life. Currently, the maximum punishment for recruiters is up to 10 years in prison.

The act also introduced a new concept in the criminal code – “inciting terrorism”. It meant “the dissemination of materials and (or) information aimed at the formation of a consciousness of the face of the ideology of terrorism, belief in its attractiveness, as well as distorted views about the permissibility of carrying out terrorist activities”. The deputies made amendments to article 205.2 of the criminal code (“Public appeals to implementation of terrorist activity or public justification of terrorism”) that provides for penalties in the amount from 300 thousand to 1 million rubles or the penalty of deprivation of liberty for a term from five to seven years.

The adoption of the law on toughening of responsibility for recruitment now more urgent than ever, said to journalists Shhagoshev. “A law imposing life imprisonment for recruiting closes a cycle of Russian laws aimed at combating international terrorism”, – he stressed.

The Deputy noted that after the withdrawal of part of the military contingent of the Russian Federation from Syria recruiting activities can be activated, “the strengthening of the responsibility for it is just a necessary measure”.