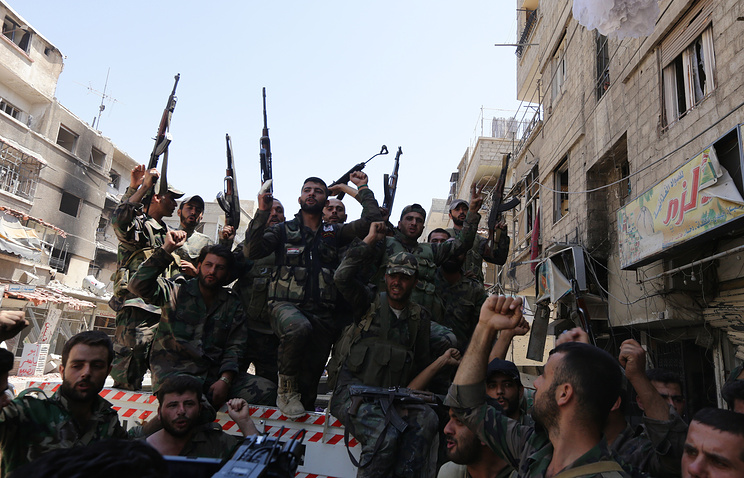 MOSCOW, December 16. /TASS/. Instructors from the United States is prepared in the training center at the refugee camp in Syria, the new armed groups called “New Syrian army”, which after a course training plan to transfer to the South of the country to fight government troops. This was stated on Saturday at the Russian Centre of reconciliation of the warring parties in Syria with reference to returnees.

“Despite statements of the American side the unconditional commitment to destroy terrorist group ISIL (ISIS, the former name of the banned terrorist group “Islamic state” – approx. TASS), the international coalition continues to work with the remnants of the terrorists in Syria. Under the guidance of American instructors of the special operations Forces from disparate groups of fighters in the training center at the refugee camp to create new armed groups, known as the “New Syrian army”. American instructors, according to returning refugees to their homes, announced that after the completion of the training course, created by the formation will be deployed in the South of Syria to fight Syrian government troops,” the message reads.

As reported in the Center for reconciliation, citing the returning liberated from ISIS areas of local residents, the international coalition led by the United States for more than six months uses for terrorist training camp of refugees located in the area 20 km North East of the town of Jisr al-Shadadi, in the province of El-al-hasakah. Currently in it, according to the Center, there are about 750 of terrorists, their main core 400 militants of the IG. In this camp, according to the Department previously was part of the destroyed Syrian government troops of the Islamic state group and “Dzhebhat EN-Nusra” (banned in Russia – approx. TASS).

“To date, in the area of the refugee camps are concentrated for about 750 fighters, who arrived from Raqqa, Deir-ez-Zor, BU-Kemal and Eastern territories of the Euphrates. The backbone of the group comprise of more than 400 terrorists of ISIS, who with the support of the US to freely traveled by convoy from Raqqa in October”, – stated in the message.