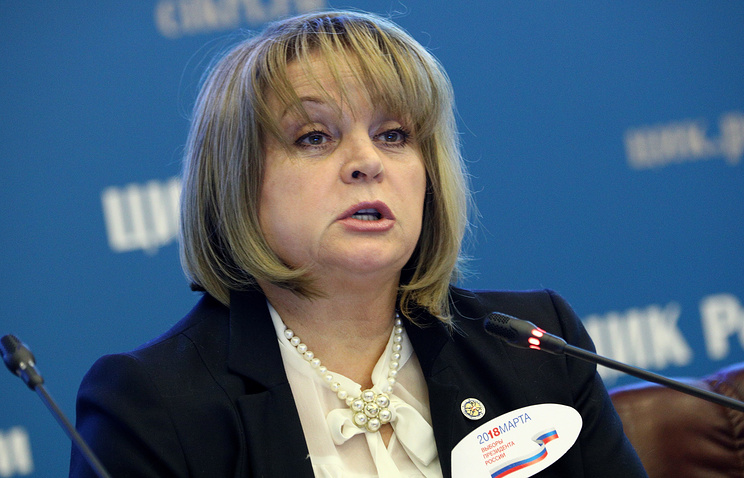 MOSCOW, December 18. /TASS/. The Chairman of the Central election Commission of Russia, Ella Pamfilova on Monday at a meeting of the Commission has started the countdown of time remaining until the presidential elections.

“The whole system of electoral commissions, together with the Central election Commission is ready to conduct the campaign at a proper level,” – said Pamfilova.

On the big screen in the meeting room of the CEC went to the countdown to election day.

CEC Chairman said that the chief in the presidential elections of the Russian Federation, the recognition by all citizens of the country.

“The most important thing – that these elections recognized by the citizens of the Russian Federation”, – she told journalists on Monday.

Pamfilova stressed that the CEC sees its main task to provide information about upcoming elections to every voter. “I think we need to do everything possible so that citizens know about the presidential elections. It is very important that citizens are not ignored [the elections], not stayed, and then grumbled” she said.

“We will do everything possible to motivate people to come to polling stations”, – said the CEC head.

Who intends to participate in the campaign

At the moment, according to the CEC, already 23 people expressed the desire to run for President of the Russian Federation.

The current head of state Vladimir Putin in its fourth presidential elections will go as an independent candidate. At the present time Putin was elected in 2012 from the party “United Russia”. United Russia has already stated that it will fully support Putin and will take part in collecting the necessary 300 thousand signatures of voters.

Willingness to stand as candidates for elections long before the start was expressed by the head of the Federal political Committee and one of the founders of the party “Yabloko” Grigory Yavlinsky and almost a permanent participant of all the presidential campaigns in Russia, LDPR leader Vladimir Zhirinovsky.

In addition, presidential elections intend to participate representative of the President on protection of entrepreneurs ‘ rights, Chairman of the Party of growth Boris Titov, the political scientist, the head of the Center for social technologies Andrey Bogdanov, TV presenter Ksenia Sobchak (from the party “Civil initiative”), the Chairman of the party “Female dialogue” Elena Semerikova, businessman Sergei Polonsky, singer and human rights activist Catherine Gordon, and some unknown to the broad public figures.

And the leader “Fair Russia” Sergei Mironov said recently to journalists that the party positively to the nomination of Vladimir Putin. The source in the party told TASS that a just Russia is likely to refuse the nomination in favor of the incumbent.