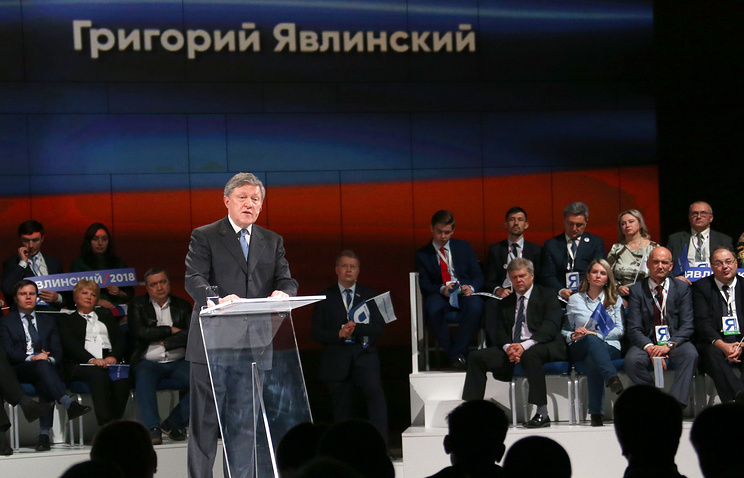 MOSCOW, December 22. /TASS/. The Congress of the “Yabloko” has officially nominated the founder of the party and the President of its Federal political Committee Grigory Yavlinsky candidate on presidential elections, the correspondent of TASS.

The vote itself took place on the first day of Congress on Thursday, but the official results were announced on Friday. “Votes for – 98 , against – four,” announced the results of a secret ballot the Chairman of the counting Commission of the Congress.

In a press-service of “Yabloko” TASS said that the observance of all procedures was monitored by a member of the Central election Commission of the Russian Siyabshah Sapiev.

Yavlinsky presented his election program to the delegates on the first day of the Congress. According to the politician, “the party approached the elections with the concept of the future.” “A person’s life, freedom, dignity, creativity and equality of opportunity – in this sense the future of Russia”, – he listed program provisions. According to the candidate, the main task is to give people the opportunity to “live without fear, without tyranny, without the threat of poverty.”

Yavlinsky also said that “Apple” is a program in respect of the property. “To once and for all was intact,” he explained. The candidate from “Apple” intends to also offer the program of gasification of the country. “30-40% of the population has no gas; in Tomsk, where next to build a gas pipeline “Power of Siberia”, 8% of residents provided with gas,” he says.

In international politics Yavlinsky promises to “normalize relations with the world, Europe first and foremost with Ukraine.” “We are fighting with you for the world, this is the most important ethical category,” he said, expressing confidence that the Russians want to live in the world.

Yavlinsky also convinced that the party can successfully contest the election. “We can be successful, I often cite the example of municipal elections (in Moscow in 2017 of the party “Yabloko” took the second place after United Russia, receiving more than 11% of the vote – approx. TASS). We can win in such difficult regions as Karelia or Moscow”, – said the candidate.

According to him, if each of the million voters who voted for Yabloko in the parliamentary elections of 2016 will bring to the polling station, 10 people, the party will receive a “very compelling interest”.

The stages of the campaign

Under Russian law, candidates of the parties must apply to the CEC no later than January 12. After that comes the period of collecting signatures. Yavlinsky nominated by the non-parliamentary parties, for registration it is necessary to collect 100 thousand signatures of voters and within the region may be collected not more than 2,5 thousand signatures. To submit tips and documents for the registration will be possible from December 27 until January 31.