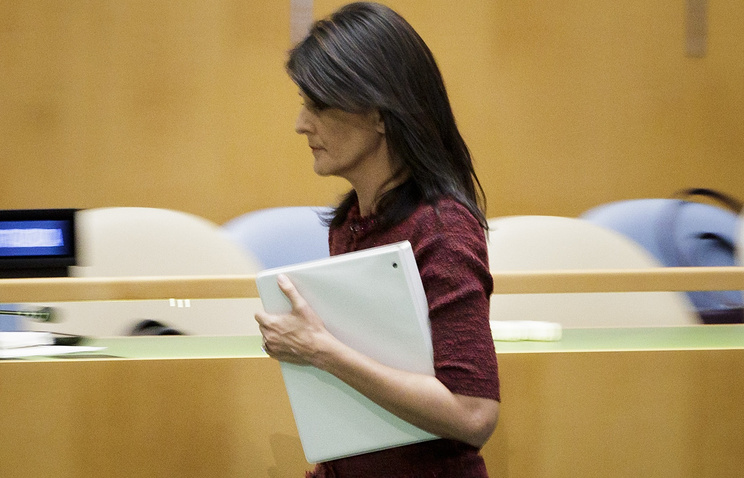 MOSCOW, December 22. /TASS/. US Ambassador to the UN, Nikki Haley was sent to representatives of countries – members of the UN threatening letters on the eve of voting in Jerusalem. This is stated in a statement on Friday comments by the Russian foreign Ministry.

As reminded in the Ministry, on the eve of the UN General Assembly adopted a resolution on Jerusalem, the text of which was identical to the previously avetisovna USA project on the Security Council. “The resolution recognized null and void all decisions and actions aimed at changing the status of Jerusalem, including the diplomatic missions,” – said in Russian depodesta.

“It is significant that the vote was preceded by overt pressure from Washington in the UN General Assembly, the intimidation in that country that will vote for in the future risk losing American aid and support, – said the Russian foreign Ministry. – Relevant threatening letters were sent to representatives of member States, the United States Ambassador Hayley. And still the resolution was supported by the vast majority of countries”.

As have informed in the Ministry of foreign Affairs of the Russian Federation, in support of the document voted by 128 States, including Russia, opposed by only nine. “To blackmail [from the USA] yielded very few, – the Ministry noted. – Loyal proved Ukraine. Voting December 18, the UN Security Council for the draft in the General Assembly, Kiev changed its position and shyly declined to vote, [and] the representative left the meeting room”.