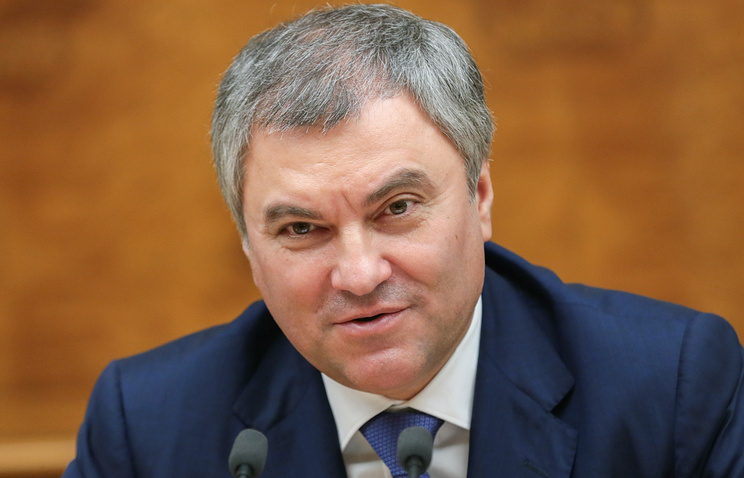 ISLAMABAD, December 24. /TASS/. The media should exercise restraint in the matter of submission of information, as this may provoke extremist sentiments in society. On Sunday during the first regional inter-parliamentary conference on security and fight against terrorism, said the speaker of the state Duma Vyacheslav Volodin. The forum is attended by heads of parliaments of Afghanistan, Pakistan, Iran, Turkey, China and Russia.

According to him, terrorists cannot be defeated on the ideological front, without creating an atmosphere in society rejection of extremist ideas. That is why another “step in this direction would be the adoption in the UN of the concept of “voluntary counter-terrorism restrictions the media and officials”.

“It [the concept] involves restraint of the media in the information discharge, capable of provoking extremist sentiments in society,” he explained, also pointing to the importance of involvement of civil society institutions, religious leaders and the expert community.

The Chairman of the lower house of the Russian Parliament as a result of successful experience in creating an appropriate legislative framework in Russia, which allows pre-trial blocking of the Internet resources that promote terrorism.

The struggle against “color revolutions”

In addition, Volodin said that countering “color revolutions” should be discussed at the parliamentary level.

“At the parliamentary level it would be right to discuss combating so-called “color revolutions”. They often begin with interference in the internal Affairs of States”, – said Volodin.

Volodin urged parliamentarians not to confuse the concept of “military assistance”, which is the country at the request of its government, with the concept of “occupation”. Earlier, the delegate of Pakistan has put in a series of US actions in the middle East and the presence of the Soviet Union in Afghanistan, describing them as an occupation.

“I wish that my colleagues have stressed the difference between the military assistance and occupation. Military assistance is at the request of the legitimate government, the occupation does not provide for such appeals, as you know” – drew the attention of parliamentarians Volodin.

“When you start to throw stones in the story, it doesn’t promote trust and improve relations,” added the speaker, noting the need for a common conceptual apparatus, to avoid future double standards.

The interaction of parliamentarians

A large delegation of parliamentarians from the Russian Federation, together with representatives of the business community are planning to visit Iran next year. This was stated on Sunday, the speaker of the state Duma at the meeting with head of Majlis (Parliament) of Iran Ali Larijani.

“We are preparing a trip to Iran with a large delegation. This trip shows the great interest of the Russian business”, – he said.

In turn, Larijani re-invited the Chairman of the lower house of the Russian Parliament to take part on 16 and 17 January 2018 at the conference of parliamentarians of the Islamic countries held in Tehran. Volodin thanked for the invitation and expressing regret that you will not be able to personally attend the conference. However, he assured that the Russian delegation will take part in the forum.