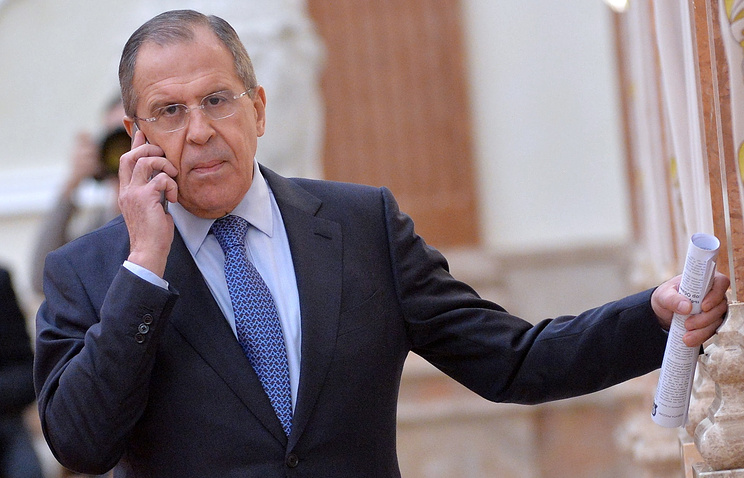 MOSCOW, December 26. /TASS/. The Minister of foreign Affairs of Russia Sergey Lavrov and U.S. Secretary of state Rex Tillerson discussed Tuesday during a telephone conversation the solution to the conflict in Syria, including the holding in Sochi of the Congress of the Syrian national dialogue. This was stated in the Russian depodesta on the results of the conversation held on the initiative of Tillerson.

“We considered further steps on overcoming of the conflict in Syria, while preserving its territorial integrity, including the holding in Sochi of the Congress of the inter-Syrian national dialogue in the framework of efforts to promote a settlement based on UN security Council resolution 2254 and encourage direct talks between the Syrian government and the opposition in Geneva without any preliminary conditions”, – noted in the foreign Ministry.

Countries – guarantors of a ceasefire in Syria – Russia, Iran and Turkey agreed on 22 December up to the international meeting in Astana on holding a Congress of the Syrian national dialogue in Sochi on 29-30 January 2018. It is expected that the forum will focus on the development of a new Syrian Constitution and the holding of elections under UN auspices. Prior to the convening of the Congress of Russia, Iran and Turkey will hold a preparatory meeting in Sochi on 19-20 January.

Sergey Lavrov also discussed with Rex Tillerson inadmissibility of escalation of tensions around the Korean Peninsula.

“The sides were unanimous in the opinion that nuclear missile development in the DPRK violate the requirements of the UN Security Council. Sergei Lavrov, however, once again stressed the inadmissibility of escalating tensions around the Korean Peninsula aggressive rhetoric of Washington to Pyongyang and capacity in the region, military preparations, – noted in the foreign Ministry. – Emphasized the need for a speedy transition from the language of sanctions to the negotiation process.”

As said on Tuesday the press-Secretary of President Dmitry Peskov, Moscow is ready to mediate between the US and the DPRK, but this requires the consent of the warring parties.

The Russian foreign Minister and U.S. Secretary of state reaffirmed the importance of the bilateral channel of consultations on Ukraine in addition to the work of the contact group and the Normandy format.

“Touched on other international topics, including the situation in Ukraine in the context of the implementation of the Minsk agreements – stated in the foreign Ministry. – Confirmed the importance to further engage the channel of bilateral consultations in addition to the work of the contact group and the Normandy format”.

As stated on 14 December at a press conference the President of Russia Vladimir Putin, the United States are full participants in the settlement in Ukraine, regardless of the channel format. “The United States, in fact, are full and equal participants in the settlement process, regardless of whether they are in the framework of the Normandy format or not, – said Putin. – The United States is still very deeply involved and aware of all the events taking place there. Do I need to include them formally in the Normandy format? Don’t know in any case is not up to us. I was never against it.”

Diplomats during a telephone conversation agreed to strengthen the dialogue on topical problems in the sphere of strategic stability.

“When discussing bilateral relations Lavrov and Rex Tillerson agreed to intensify dialogue on topical issues in the sphere of strategic stability, – have informed in the Russian foreign Ministry. – The two sides agreed to stay in close contact”.

Lavrov and Tillerson held on 7 December a personal meeting in Vienna on the sidelines of the meeting of the Council of foreign Ministers of the OSCE. As has declared then the Russian Minister, Moscow and Washington will continue a dialogue on strategic stability, including on the reduction of strategic offensive arms. “We will continue contacts on issues of strategic stability of the agreements between us are, including in the sphere of reduction of strategic offensive weapons, intermediate-range and shorter-range issues that arise in respect of the Treaty on open skies,” he said.