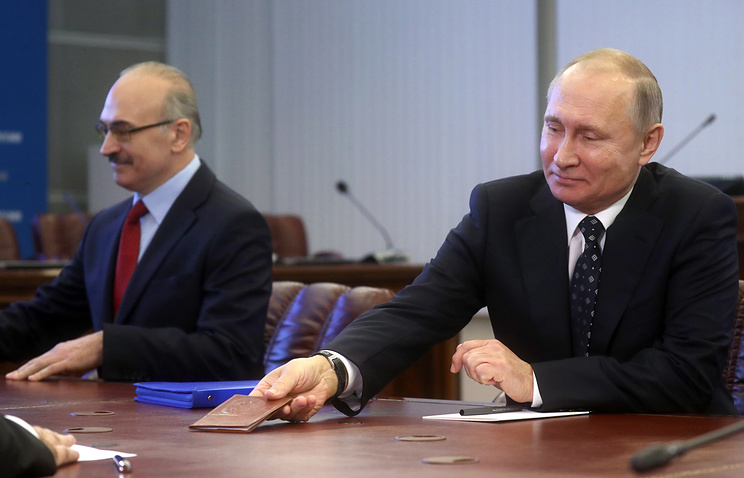 MOSCOW, December 28. /TASS/. The Central election Commission of the Russian Federation at session on Thursday has registered the group of voters created for support of self-nomination of the President of Russia Vladimir Putin at the presidential elections in March 2018.

In addition, the Commission registered the authorized Putin on financial issues and allowed to open a special account in the savings Bank, without which it is impossible to begin collecting voter signatures to register for elections.

Putin submitted to the CEC the documents required for the nomination, 27 December.

In a press-service of the CEC previously reported that for the verification of documents of all candidates is sent 14 requests in 12 different departments. However, as a rule, the Commission adopts a decision on registration of commissioners and the permission to open electoral account on the next day after receiving the documents.

Special electoral account of all the candidates open the branch of Sberbank in the Armory lane. Only after that candidate can start the active phase of the election campaign: to collect signatures of voters and to campaign, because the manufacture of subscription lists, campaign materials and any other work must be paid for from the electoral Fund. The size of the election Fund of a candidate in the presidential elections may not exceed 400 million rubles.

Putin, who goes on elections as the independent candidate, after the opening of the election account will have to collect not less than 300 thousand signatures to be registered for the elections. Presidential elections will be held on 18 March.

Earlier, the CEC is allowed to open a special electoral account of a number of candidates. Among them, the business Ombudsman, the head of the Party of growth Boris Titov put forward the “Civil initiatives” presenter Ksenia Sobchak, one of the founders of the party “Yabloko” Grigory Yavlinsky, head of the “Communists of Russia” Maxim suraykin and others. the Chairman of LDPR Vladimir Zhirinovsky, are exempted from collecting signatures, the first of the candidates passed the procedure of nomination, election, opened an account and on December 27 handed over to the CEC documents for registration in the elections.