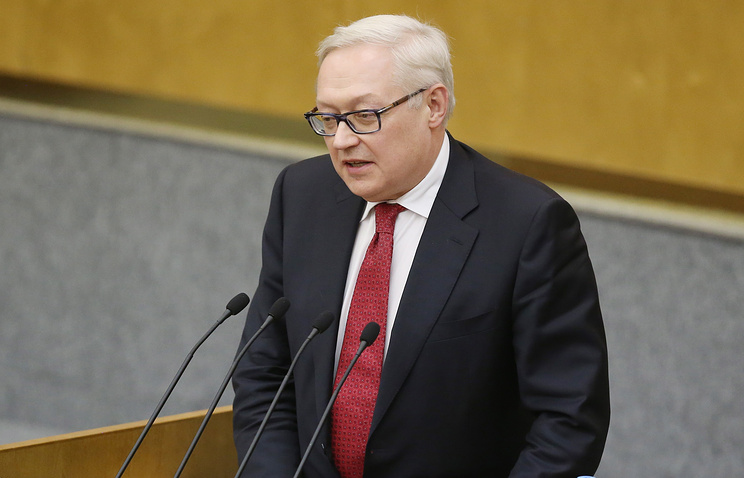 MOSCOW, January 4. /TASS/. Moscow warns Washington against attempts to interfere in the internal Affairs of Iran. This was stated on Thursday, TASS Deputy Minister of foreign Affairs of Russia Sergey Ryabkov.

“We warn the US against attempts to interfere in the internal Affairs of the Islamic Republic of Iran, he stressed. – What is happening there – this is an internal matter that draws the attention of the international community, but despite many attempts to distort the essence of what is happening, I am sure that our neighbor, a friendly state, can overcome the current difficulties and emerge from the current period to strengthen the country and a reliable partner in solving various problems, including those associated with further implementation of the Joint comprehensive plan of action on Iran’s nuclear program (SVPD)”

According to him, the United States deliberately using the situation in Iran to try to undermine the stability of the AGREEMENT. “The current situation where in Washington are tempted to use the moment to raise new issues in relation to the AGREEMENT, is evidence of a deliberate attempt to undermine and erode the international community’s commitment AGREEMENT, said Deputy foreign Minister. – It does not honor our American colleagues.”

In this regard, he reiterated that Russia stands for the preservation of the nuclear deal and its “full and sustained compliance by all parties, especially the United States.” “I say this because no complaints about the implementation of the agreement the Iranian side is not and can not be, this has been repeatedly confirmed in the reports of the IAEA Director General”, he continued, Recalling that the agreements reached are an important factor of strengthening regional and global security.

The Deputy Minister, commenting on the statements by Vice-President Michael Pence about what the U.S. aimed at securing a longer-term agreement on Iran’s nuclear program, said that the United States demonstrate a destructive approach to SVPD, requiring a revision of certain provisions of the agreement.

“All terms, date ranges and limits that were set in the AGREEMENT, were the result of severe, very prolonged negotiations, recalled a senior diplomat. So now he arbitrarily snatch out of the total package only what suits the Americans, and to demand changes in those provisions that, for reasons unknown to us, Americans are not satisfied with the destructive approach, it could undermine the hard-formed arrangement”.

The diplomat called a destructive approach US attempts “to arbitrarily snatch out of the total package only what suits them, and to demand changes in those provisions which for some reason Americans are not satisfied”. “We can’t imagine a situation when in power the wishes of one of the States that had developed at the time this deal now will start some kind of adjustment. This is simply impossible”, – he said.

The Deputy foreign Minister stressed that Moscow would “firmly adhere to the line that the AGREEMENT is not subject to correction”. “Efforts need to focus on its full implementation, including the continuation of work on creation of normal conditions for doing business with Iran economic operators from different countries, which continues to obstruct the United States,” he concluded.

“Returning to the theme that the American colleagues started to “warm up” a few days ago regarding the possible involvement of the UN security Council in connection with the events in Iran remind us that the Security Council is the body which has primary responsibility for maintaining international peace and security, he said. – Internal processes in Iran, as in any other country, to the statutory functions of the UN security Council have no relationship”. “It is sad that our American colleagues is necessary to reiterate the basics of diplomacy,” stated Ryabkov.