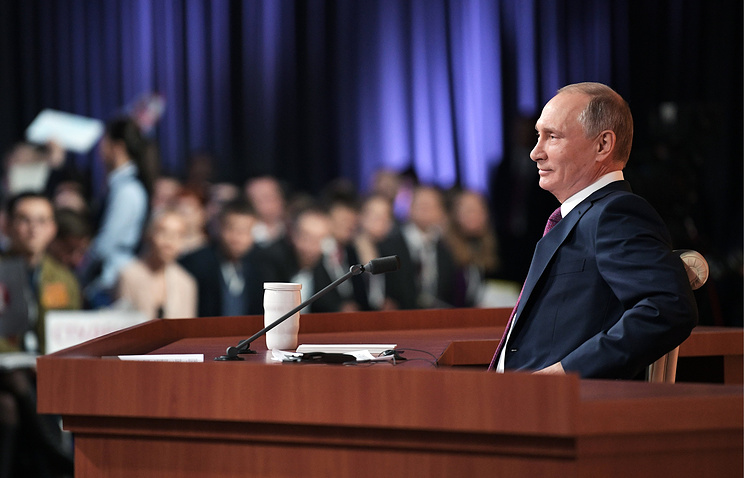 According to her, the signatures will be assembled in strict accordance with the law.

The Nomination Of Putin

On December 26 a meeting of electors, held in the historical Park “Russia – my story” on VDNH, took the decision to support the nomination of Russian President Vladimir Putin in the presidential elections that will be held on 18 March 2018. The hall was attended by 668 people with the necessary 500. In support of Putin was made, in particular, the artistic Director of the Maly theatre Yuri Solomin, pianist Denis Matsuev, actor Mikhail Boyarsky, singer Polina Gagarina, fashion designer Valentin Yudashkin, Chairman of the “Fair Russia” Sergei Mironov, state Duma deputies and Federation Council members, the leader of the “Victory Volunteers” Olga Emelchenkova, co-chair of the Central staff of the Russian popular front (onf), Vice-speaker of the state Duma Olga Timofeeva, head of the Executive Committee of the popular front Alexey Anisimov and others.

December 27, Putin has personally submitted documents to the CEC. The next day the Central election Commission registered a group of voters created for support of self-nomination of Putin. In addition, the Commission registered the authorized Putin on financial issues and allowed to open a special account in the savings Bank, without which it is impossible to begin collecting voter signatures to register for elections.

Authorized Putin on financial issues was the first Deputy head of the Central Executive Committee of “United Russia” Natalia Orlova. She was his Commissioner for financial Affairs during the campaign of 2012. Empowered group of voters established in support of self Putin, were Oksana Druzhinina, Alexei Ermakov, Sergei Kabyshev, who accompanied Putin during the submission of documents to the CEC, Andrey Tikhomirov and Hope Cacheline.