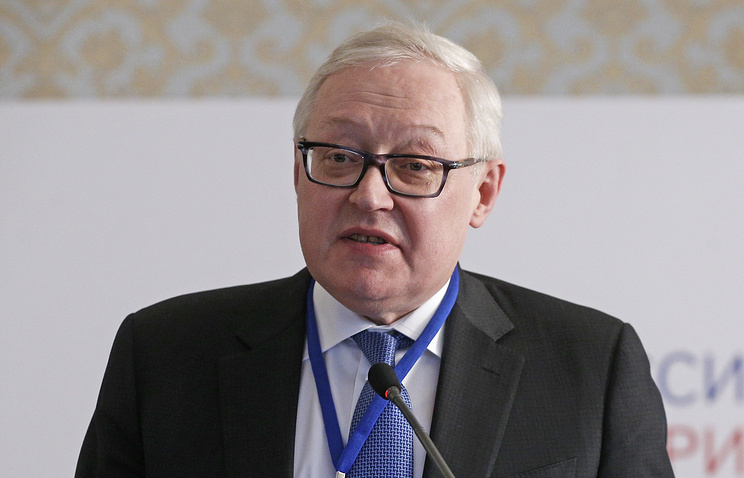 MOSCOW, January 5. /TASS/. Russia considers a step in the right direction of restoring the special ties between the DPRK and the Republic of Korea and the willingness of the parties to direct contacts. This was stated on 5 January, TASS Deputy Minister of foreign Affairs of the Russian Federation Sergey Ryabkov.

“First of all, of course, we note with satisfaction the readiness of Seoul and Pyongyang to hold direct contacts, he said. Hotline is a useful and important tool of de-escalation in emergency circumstances. We believe that this is a step in the right direction.”

Russia will continue to work with all parties on the situation on the Korean Peninsula to use every chance for improvement of the situation in the region, said Ryabkov

“We will continue to persistently and consistently work with all parties for the use of everyone, any chance to improve the situation”, – he said.

Ryabkov also said that Russia calls on Washington to exercise utmost restraint, so as not to undermine the chance for a political process on the Korean Peninsula.

As the diplomat noted, “in this situation, the other participants of this drama should exercise utmost caution, prudence and restraint in statements and evaluations, not to undermine these fragile chance at some more or less stable political process”. “Statements threatening signals, even if not on the part of officials and politicians, still have an impact on the environment – continued Ryabkov. For all in the current situation, in our opinion, it is important to exercise the utmost responsibility.”

“We’re directing these appeals primarily to colleagues in Washington, which, in our estimation, too much attention to the techniques of the pressure in nature, attempts to exert pressure, not only verbally, but also power,” – said Deputy Minister of foreign Affairs. Ryabkov said that “in this regard, of course, it would be important to announced yesterday the willingness of Washington and Seoul during the Olympic games to refrain from the exercise embodied in practical Affairs, that this intention was realized”.

Russia expects that the representatives of the DPRK and the Republic of Korea at the upcoming talks, exchange views not only on the part of team Korea in the Olympics, but also on the prospects of improved relations and a political solution to the problems of the Korean Peninsula.

“With regard to the forthcoming consultations or negotiations, although claimed their purpose – part of team Korea in the winter Olympics, we think and hope that the two sides will be able to exchange [views] on other issues, the prospects for gradual improvement of relations, possibly according to other aspects of the work towards a political solution, of course, a political solution to the problem of denuclearization of the Korean Peninsula,” – said Ryabkov.

Moscow considers it important that the declared readiness of the United States and the Republic of Korea to refrain from conducting exercises in the upcoming Olympic games has been implemented in practice.

“In this regard, of course, it would be important to announced yesterday the willingness of Washington and Seoul during the Olympic games to refrain from the exercises, embodied in practical Affairs, that this intention has been implemented,” – said Ryabkov.

The situation on the Korean Peninsula

The Republic of Korea and the DPRK on 3 January restored the line of special communication in the village of Panmunjom on the common border. On 5 January the Ministry of enterprises of the Republic of Korea announced that Pyongyang had accepted the offer of Seoul on the holding for the first time since December 2015 negotiations at the highest level. They should be 9 January in the border Panmunjom. It is expected that the topic will be the possible participation of the national team of the DPRK at the upcoming winter Olympics in South Korea’s Pyeongchang.

January 4, South Korean President moon Jae-In and President of the United States Donald trump during a telephone conversation agreed not to conduct joint naval exercises in the course of the Olympic games on the condition that North Korea will not undertake any provocative actions. Thus in the message of the press service of the White house at the end of the conversation it was noted that the United States and the Republic of Korea will continue to exert pressure on North Korea so that Pyongyang abandoned its nuclear and missile programs.

Pentagon chief James Mattis later than 4 January said that the joint with the Republic of Korea military exercises will be resumed immediately after the Olympics.