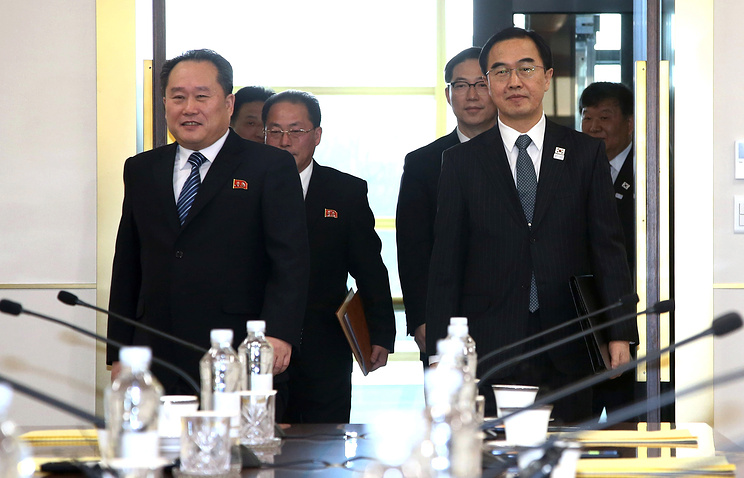 MOSCOW, January 10. /TASS/. Russia welcomes the agreement on the high-level talks in Panmunjom between representatives of the DPRK and the Republic of Korea. This is stated in a statement on Wednesday the comments of the Russian foreign Ministry.

“We welcome the agreements reached during the meeting in Panmunjom on 9 January talks between the DPRK and the Republic of Korea, including on the participation of the North Korean delegation to the winter Olympics in South Korea’s Pyeongchang, said the Ministry. – Express the hope that their implementation will serve to de-escalate tensions on the Korean Peninsula and stability in the subregion”.

In Russian depodesta expressed hope that all stakeholders will support the steps Pyongyang and Seoul to resume dialogue. “We are convinced that this is the only possible way to find a mutually acceptable solution to the problems of the Peninsula by peaceful, political and diplomatic means, which has always called our country”, – stressed in the foreign Ministry.

“This is the objective developed by Russia jointly with China’s road map for a comprehensive settlement on the Korean Peninsula, which proposes the mutual refusal of the United States and the DPRK from a dangerous military activity in the interest of creating atmosphere for the start of negotiations with the ultimate goal of formation in North-East Asia collective system of peace and security, – noted in the Ministry. We invite all involved States to join the work on the practical implementation of the document”.

“I hope that the positive trends in inter-Korean dialogue will develop further, – said the Russian foreign Ministry. – We are ready to continue this process all possible assistance”.

The first round of dialogue on normalization of relations between the Republic of Korea and the DPRK took place on January 9th. Following the talks, the sides agreed on resumption of work of the hotline connection between the military of the two countries, hold consultations to reduce the tension on the border, and that North Korea will direct in February for the Olympics in Pyeongchang representative government delegation, the demonstration team of Taekwondo athletes, fans and support group.