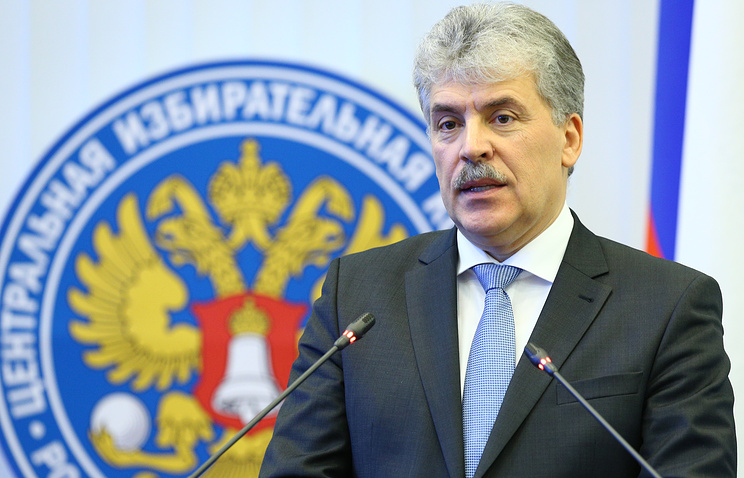 MOSCOW, January 12. /TASS/. Income put forward by the Communist party in the elections of the President of Russian businessman Pavel Grudinina over the past six years amounted to more than 157 million rubles, also on its account store almost 6 million roubles. This follows from information on the income and property of the candidate, published Friday on the website of the CEC.

The document stated that the total amount of money deposited in five accounts in banks Grudinina, is 5 million 920 thousand rubles 868.

A businessman has just over 1 million 993 thousand shares of closed joint stock company “Sovkhoz imeni Lenina”, and the limited liability company “TT development” he owns “a share in the right 4%”.

Businessman Pavel Grudinin before registering as a candidate closed the account in a foreign Bank in the amount of 14,4 million roubles and got rid of the securities the aggregate nominal value of almost 7.5 billion rubles. It should be submitted to the Central election Commission of Russia to clarify the information about incomes, property and securities.

By law, all candidates for nomination to the presidential elections served to CEC data on income, assets and securities as of the first of the month, which was declared the campaign. In these elections the candidates were presented certificates as of 1 December. As earlier told reporters the CEC member Yevgeny Shevchenko, Grudinin 28 December filed papers for the nomination, while they had no information on five foreign accounts and foreign securities. On 9 January, representatives of Grudinina filed to the CEC documents for his registration as a candidate, including clarification of information about income and assets, which were listed five accounts with a foreign Bank and details of securities total number of 600 pieces.

Simultaneously, it filed a notice stating that the candidate keeps his money in foreign banks and not to use foreign financial instruments. Documentation of income and accounts and notice that Grudinina no foreign accounts and assets, was published on the Commission’s website.

According to clarifications directed by Grudinina to the CEC, he as of 1 Dec on one foreign account remained 14 million 390 thousand roubles, in another – 16 thousand 760 rubles. The other three accounts had a zero balance.

Income, accounts and property of the spouse

According to published reports, the total income of the spouse of the candidate in presidents Irina Grudinina in the six years preceding the year of elections, amounted to more than 2 million 622 thousand rubles. Sources of funds are called “wages, limited liability company “Tair”, pension, sale of property and interest (income from investments)”.

The Grudinina owns two apartments with an area of about 60 square meters in Moscow and an area over 100 sq m in the Moscow region. She also owns two Lexus cars 2012 and 2016 model years.

On accounts and deposits in banks at the Grudinina is almost 2 million 76 thousand rubles. All in the name of the candidate’s wife opened 11 accounts.

Grudinina also owns a 50% stake in the right of the limited liability company “Tair”.

The CEC at a meeting on 12 January Grudinina registered as a presidential candidate. He became the second registered candidate, the earlier stage of registration has successfully passed the leader of LDPR Vladimir Zhirinovsky.

A member of the CEC Boris Ebzeev said during the meeting that Grudinin when submitting documents for the nomination pointed out that it has five accounts in a Bank in Vienna. Another CEC member Yevgeny Kolyushin said that all the accounts were closed before the registration of the candidate.

By law for registration, the applicant must submit to the CEC the certificate of absence of accounts or financial instruments abroad.