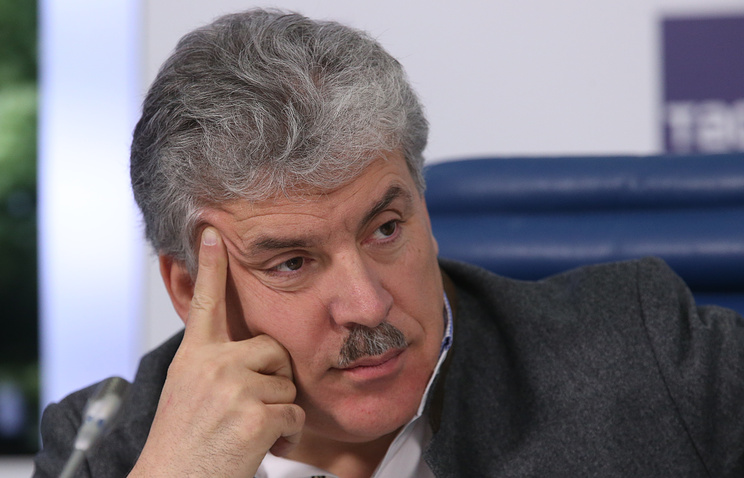 MOSCOW, January 17. /TASS/. The downgrade of the candidate in presidents from the Communist party Pavel Grudinina due to the fact that he failed to keep his electoral potential, and almost exhausted the possibilities to attract supporters of the Communist party. Such an opinion was shared on Wednesday, to experts interviewed by TASS.

Earlier all-Russia centre of studying of public opinion (VTSIOM) has presented results of the survey about the level of support of candidates on elections of the President of the Russian Federation. It is noted that the support rating Grudinina after a period of growth in late December – early January, began to decline. He now shares second place with Vladimir Zhirinovsky (the level of support of both politicians is 6.1%).

According to the head of the Agency for political and economic communications Dmitry Orlov, Grudinina was “of primary interest among the electorate of the Communist party and the population.” “Grudinin shot in December, got a electoral potential, but couldn’t hold him. He needs to expand on the campaign, to garner support,” – said the expert. He believes that Grudinina will not be the explosive growth of the rating that its correction will be “very gradual” growth.

In turn, Director of the Center for political conjuncture Alexei Chesnakov expressed the opinion that Grudinin has almost exhausted the possibilities to attract supporters of the Communist party. “Not so much – no more than 8-10% of the total electorate. Some of them, by the way, it never will vote,” – said the analyst.

The Russian presidential election will be held on 18 March 2018. At midnight on January 12 ended the nomination period. The campaign currently involves 17 people, including two independent candidates (the incumbent President of Russia Vladimir Putin and Kostroma Deputy Vladimir Mikhailov). The two candidates nominated by parliamentary parties (Vladimir Zhirinovsky from the liberal democratic party and Pavel Grudinin from the Communist party) is already registered.