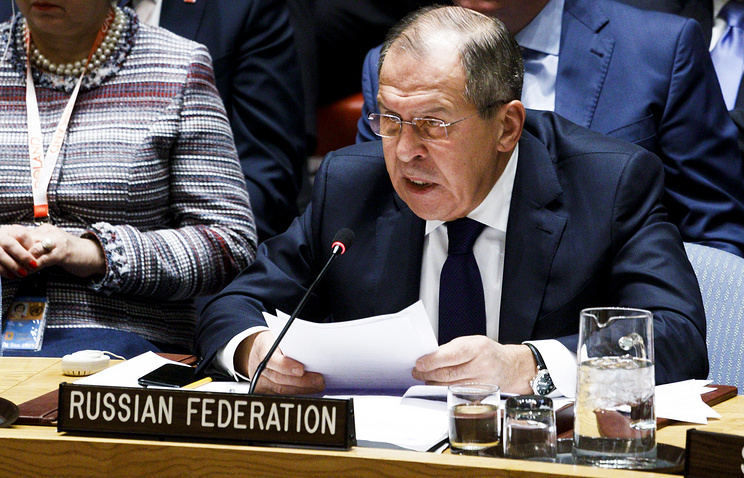 UN 18 Jan. /TASS/. Moscow urges to consider the real risks of the spread of chemical terrorism outside the Middle East. This was stated on Thursday, the Russian foreign Minister Sergei Lavrov at a UN security Council meeting on non-proliferation of weapons of mass destruction (WMD).

“One cannot ignore the very real risks of the spread of chemical terrorism outside the Middle East, taking into account, in particular, a very large segment of foreign fighters among the extremists,” he said.

Lavrov said that arrived in Syria and Iraq from abroad, the terrorists “have already received opportunity to gain practical experience and skills in the creation and use of chemical weapons”.

Thus, according to the Minister of foreign Affairs of the Russian Federation, some Western countries prefer to close their eyes to the use and production of chemical weapons by terrorists in Syria and Iraq, pushing this unsubstantiated accusations against Damascus.

“We have repeatedly offered to accept a UN security Council resolution, or at least the statement of its President condemning specific acts of chemical terrorism in Syria and Iraq, he said. – Unfortunately, all our proposals are always met with stiff resistance from a number of our Western colleagues, who prefer to close their eyes to the facts of the use and even production of chemical weapons by terrorists, make unsubstantiated accusations against Damascus.”

The Russian foreign Minister noted that Moscow considers unacceptable “to speculate on the objectives of combating proliferation of weapons of mass destruction to pursue their own geopolitical goals.”

In early 2016, the Russian side put forward the initiative to draft an international Convention for the suppression of acts of chemical and biological terrorism. The proposal was supported by several international partners, including China.

Moscow has repeatedly stressed the relevance of such a document and urged to demonstrate the political will for its adoption.