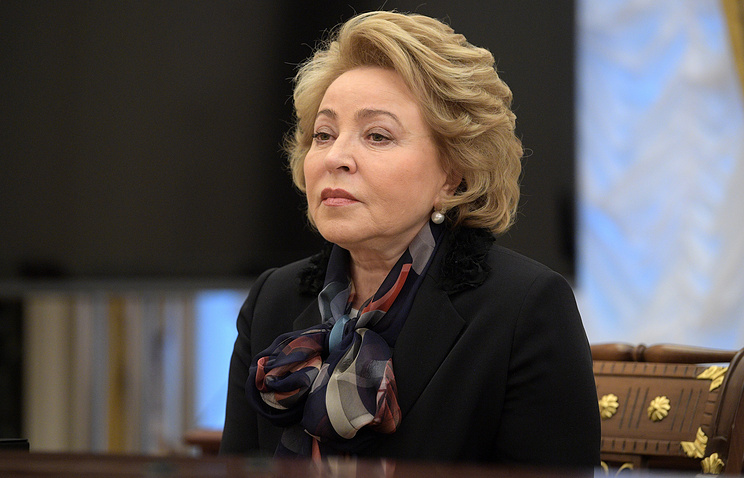 MOSCOW, January 18. /TASS/. Kiev, by adopting the law on the reintegration of Donbass, buried the Minsk agreement and made a bid for power return of the Donetsk and Lugansk. This opinion was expressed on Thursday by the speaker of the Federation Council Valentina Matvienko.

“Today we once again got proof that the Kiev authorities were not going to fulfill Minsk agreement. Proof that they have relied on force and not on the world. This law is not about peace and not about reintegration of Donbass, it is the law of war. It is necessary to call things by their proper names” – quoted Matvienko, the press service of the Federation Council.

She stressed that the Ukrainian authorities were not in the law prescribe measures leading to the commencement of negotiations, the peace process, dialogue, political solution to the domestic crisis. “This law says that Kyiv continues to rely on armed attempt way to take back Donetsk and Lugansk. But it is a profound mistake, this is the road that leads to nowhere,” – said Matvienko.

According to the speaker of the Federation Council, as history shows, to solve this kind of crises requires only a “peace process, only a dialogue, no matter how difficult it might have been.” “But this law was buried the Minsk agreement. He created conditions for irresponsible, uncontrolled use of the armed forces, the use of weapons. It not taken any step towards the peace process,” – said Matvienko.

In her opinion, adoption of law is caused by the fact that the countries-guarantors – Russia, Germany, France – are increasingly put pressure on Kiev authorities forcing them through the steps to implement the Minsk agreements. “But the content of the Ukrainian leadership did exactly the opposite of what was written in them. One more thing – rude attitude to the brotherly people, to our country. Accused of nonexistent sins. Call us aggressors, invaders. Claim that on the territory of Donetsk and Lugansk are some virtual armed forces of Russia”, – said Matvienko.

According to her, is an attempt to find those responsible for the catastrophe that happened in Ukraine after the coup. “The attempt to shift responsibility for difficult economic the social situation in the country, the collapse of the industry, the economy. For the heinous living conditions of people, a sharp drop in incomes. This is an attempt to find the person to blame for Russia”, – said Matvienko.

She noted that from the people who organized the coup, “carried on “Maidan” sniper rifles, which killed peaceful protesters, anything else can wait no longer”. “They can’t understand that the time will come, the hour comes, and they will answer for the crimes committed against his country, his people”, – said the head of the Federation Council.