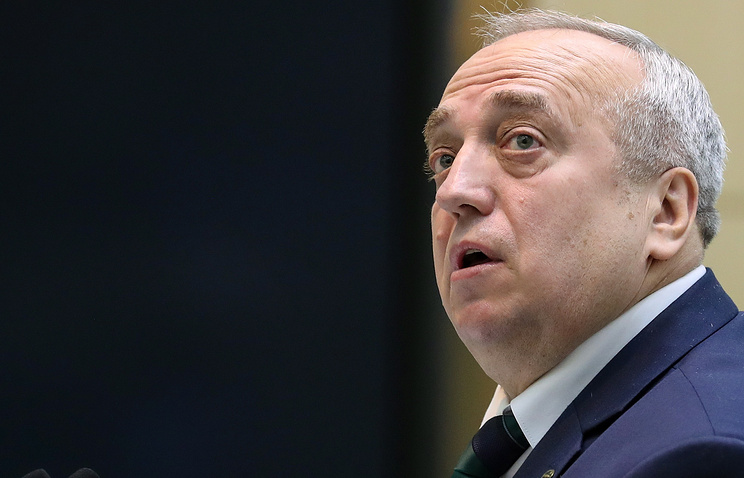 MOSCOW, January 22./TASS/. The rejection of the proposals of the Russian Federation on the return of military equipment from the Crimea was to be expected and reflects an unwillingness of Ukraine for interaction with Russia. This opinion was expressed to journalists by the first Deputy Chairman of the Federation Council on defense and security Frants Klintsevich.

“Actually, another reaction we were not expecting. The current regime in Kiev are able to respond to a goodwill gesture on the part of Moscow only a political rudeness, while standing in a pose and turning everything on its head. I mean the statement of the head of the Ukrainian foreign Ministry Pavel Klimkin, Kiev has no dialogue with Moscow on the status of Crimea”, – said Klintsevich.

The Chairman pointed out that in fact the opposite is true – it’s in Russia, there can be no dialogue with Ukraine on the status of Crimea. “He defined the people in a referendum on 16 March 2014 and is not negotiable. By rejecting Russia’s proposal on the return of equipment from the Crimea, the Ukrainian government once again demonstrated its reluctance to find even the slightest common ground with Russia”, – quotes the Senator, his press service.

Earlier the President of Russia Vladimir Putin said that Russia is ready to return from Crimea to Ukraine of its military equipment, although it is in poor condition. Later commander of the Ukrainian Navy Igor Voronchenko said that this issue requires “very careful study”.

Commenting on Putin’s proposal, Klimkin on Monday that Kiev will not withdraw its military equipment from the Crimea in response to Moscow’s proposal. According to him, Ukraine has with Russia, there is no dialogue on issues relating to the status of Crimea, and Kyiv will not do “anything that could weaken” the Ukrainian legal or political position. The Minister pointed out that Kiev has not received any official request from Russia, called Moscow’s proposal “a gimmick”.