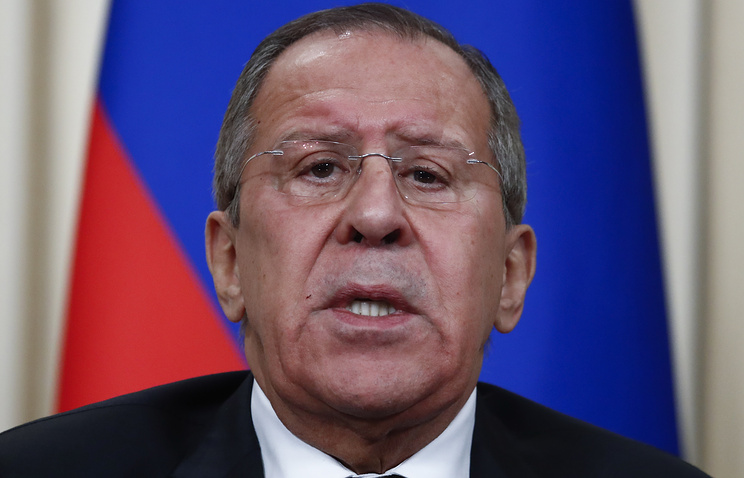 MOSCOW, January 22. /TASS/. The task of suppressing some terrorist hotbeds in Syria persists, start an inter-Syrian dialogue will allow to unite efforts to suppress this threat. This was stated on Monday the Minister of foreign Affairs of Russia Sergey Lavrov at the meeting with the head of the United Syrian opposition delegation Nasr al-Hariri.

“The Caliphate as a goal of ISIS (formerly the banned terrorist group “Islamic state” – approx. TASS) did not take place, but it is still the task of suppressing the individual hotbeds of terrorism, – said the Russian Minister. – We expect that the internal Syrian dialogue will allow to unite efforts of all Syrians in the final eradication of the terrorist threat in this country.”

The Minister stressed that agreed in the framework of the Astana process of agreement on the establishment of four zones of de-escalation “by and large, allowed to significantly reduce the level of violence.” “Now, although there are some manifestations of the surge of the fighting, the overall situation is much better than it was a year ago,” he said.

Lavrov also said that the Russian side hopes that all who have influence on various groups of the Syrian opposition, will help to ensure that an inclusive Congress of the Syrian national dialogue in Sochi.

“The success of the political process, we believe the strict implementation of all provisions of UN security Council resolution 2254, which calls for an inclusive dialogue with the participation of the government of the SAR [Syrian Arab Republic] and the broad spectrum of the Syrian opposition. We want to once again help the progress towards this goal, summoning the Congress of the Syrian national dialogue, which will take place 29-30 January in our southern capital. We hope that all those who have influence on various opposition groups, will help to ensure a truly inclusive inter-Syrian dialogue,” the Minister said.

According to him, the main goal of the Congress is the effective work of the Geneva process on Syria under the auspices of the UN. “The main purpose of the Congress in Sochi is to provide the most efficient functioning of the Geneva process under the auspices of the UN that the dialogue between all the Syrians brought the result you’re looking for all groups of the Syrian population,” said Lavrov.

“We consider counterproductive the attempts of some external actors to question the sincerity of the efforts that we take. I think that our Syrian colleagues understand the need to see the implementation of security Council resolution introduced from the external geopolitical considerations,” – said the Minister.

The Russian foreign Minister also added that Russia, Iran and Turkey was invited to Sochi all the major regional and international players. “We have tried to establish lists of invitees so that the goal is to collect under one roof all representatives of Syrian society has been achieved, the Minister noted. Together with the Iranian and Turkish colleagues we invited to participate in the Congress all the main regional and international players.”

“I am confident that if we all act in full compliance with UN security Council resolution 2254, in the near future will witness in Sochi, constructive process, that allows to reach the main agreement of the Syrian settlement, including the constitutional reform and holding on this basis of free elections supervised by the United Nations, as foreseen by the revolution of the UN security Council 2254” – said Lavrov.

Congress of the Syrian national dialogue will be held in Sochi on 29-30 January. As expected, the number of participants will be about 1.5 thousand people. In addition to the Syrian parties, the participation of observers, especially UN. One of the tasks of the Congress will be the establishment of the Commission for drafting the Constitution of Syria.