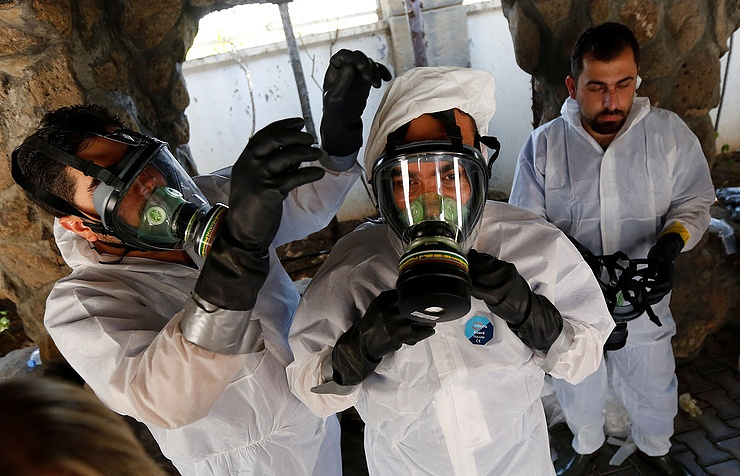 UN 24 Jan. /TASS./ The UN Security Council on Tuesday returned to the issue of the use of chemical weapons in the conflict in Syria. A public meeting was held on the initiative of Russia, which announced the introduction of a draft resolution on the creation of a new structure to establish the perpetrators of the attacks with the use of toxic substances. It is designed to be the successor to the controversial Joint mechanism of the Organization for the prohibition of chemical weapons and the United Nations to investigate (CMP), it ceased to exist in November last year.

So far, all attempts by members of the security Council to agree on continuing the work of the CMP has failed. Russia thrice vetoed an inconsistent draft resolutions on the extension of the mandate of the mechanism, which was criticized for unprofessional work. Prepared by the Moscow text, which contains an enhancement of SMR to make the investigation more objective, last year also did not find support among the members of the security Council.

The proposed new structure, the so-called Independent UN investigating chemical attacks in Syria, United Nations Independent Mechanism of Investigation, UNIMI], the intention of the Russian side, will work differently: professionally and in accordance with international standards. Despite the fact that the name of this structure is missing the OPCW, organization with headquarters in the Hague will continue to play a key role in the investigation of attacks using chemicals in the Syrian conflict.

The aim is to establish indisputable facts

According to the 8-page draft resolution, a copy of which is available to TASS, a new mechanism is proposed for an initial period of one year with possibility of extension if necessary.

The purpose of the Commission, the document says, is to “establish indisputable facts”, which will enable the Security Council to establish accountability in the use of toxic chemicals as weapons during the Syrian conflict. In the case of the adoption of the draft resolution, the new investigative mechanism will be instructed to conduct a “truly impartial, independent, professional and credible” investigation of cases of use of chemical weapons in Syria based on “reliable, proven and confirmed evidence” collected directly at the scene of the attacks.

The document emphasizes that the Security Council “will carefully analyse the findings,” to which will come the Commission of inquiry. As follows from the document, it will have to follow “the high standards set by the Convention on the prohibition of chemical weapons,” and to apply “the whole spectrum” techniques, including the collection of samples on-site attacks and interviewing witnesses.

If the Russian initiative is approved, the UN Secretary-General, Antonio Guterres and the Director General of the OPCW Ahmet üzümcü will be charged for 30 days to make recommendations with regards to the tasks, powers and composition of the Commission. In the draft resolution separately indicated that its staff should include specialists from different countries.

Introducing the draft resolution, permanent representative to the UN, Vasily Nebenzia said that Moscow seeks “to rise above the differences and offer to create a new international investigative body that is based on impeccable and irrefutable data obtained transparent and credible way, could establish the facts”, which will enable the Council to identify those responsible for the use of prohibited weapons.

The United States accepted the proposal with hostility

The permanent representative of the United States to the UN, Nikki Haley is extremely harsh on Russia’s initiative, saying that Washington would only agree on the resumption of the CMP.

“We are not going to accept any proposal of Russia, which undermines our ability to establish the truth or politicize the independent and impartial investigation. If they want to work in good faith towards this goal, we are ready now to re-establish the IDA under the original independent and impartial mandate. Anything less is unacceptable for us” – said the diplomat.

In her words, “the United States and the international community will not allow itself to deceive”. “We are firm to hold accountable those who used chemical weapons . And we will always strive to maintain the truth that the regime [of Syrian President Bashar al -] Assad did in Syria and that, unfortunately, it, apparently, will continue to do,” said Haley, simultaneously accusing Russia of “complicity in the atrocities of the Assad regime”.

The Russian Ambassador responded harshly American counterpart, has rejected Moscow’s proposal, even without knowing its essence.

“The fact that our resolution is rejected out of hand speaks volumes. This again gives the truth, which we, unfortunately, know. USA need no independent professional mechanism. You not only give the truth, but you give yourself in the eyes of the international community,” the diplomat said.

He criticized the US for trying to hold the Syrian authorities responsible for the alleged chemical attack in the suburbs of Damascus on January 22, “prior to any investigation.” “You arrogate to themselves the role of judge and Prosecutor. Do you even understand what you this issue? If you are serious in the desire to create an independent professional attribute mechanism, at least read the draft resolution, before rejecting it,” – said Nebenzia.

The text that deserve consideration

Unlike the United States, delegations from other countries have expressed their willingness to study the proposal of Russia. This was stated as traditional allies of Russia in the Council – Bolivia, Kazakhstan and China and some Western countries, including France and Sweden.

How French Ambassador Francois Delattre, “the vast majority of security Council members” dissatisfied with the fact that the discussion about the creation of a new structure for the investigation of chemical attacks in Syria have stalled. “In this context, we take note of Russia’s proposal. We will consider this proposal,” the diplomat said, adding that France in the study of the ideas of Moscow will start from their own principles.

“We need an independent mechanism, and we see that this proposal is aimed at it, but we need to agree on the text [of the resolution] and we will do our best to tip United in this matter,” – said in turn, the permanent representative of Bolivia, Sacha Llorenti.

Again taking the floor at the end of the meeting, the Russian Ambassador warned that any commissions, partnerships and mechanisms created to investigate chemical attacks, “will not be legitimate unless approved by the Security Council”. “We must proceed from this. I would repeat what was said by the permanent representative of Sweden [Olof Skoog] in his speech, and not only he: “We must overcome divisions, to engage in dialogue and try to recover the lost unity of the Council”. To this aim, our proposal,” concluded Vasily sebenza.

After the completion of the meeting in an interview with journalists, he said, Russia will give the Security Council members “sufficient time to study the draft, and then to begin consultations at an expert level.” He admitted that the discussion of the Russian initiative could take place Thursday or Friday, but stressed that at the moment nothing planned.

Security Council meeting on Tuesday took place against the backdrop came from Syria, reports of new chemical attack, allegedly committed in the Damascus suburb of East ghouta on Monday. As reported by the Associated Press, citing activists of the organization “White helmets”, as a result of the incident injured 20 civilians. The United States immediately took the blame for not yet confirmed the chemical attack on Damascus, simultaneously claiming that Russia is also responsible for the attack, as last year blocked an inconsistent resolution on the extension of the work of the CMP.

A few hours prior to the meeting, SAT in Paris hosted the first meeting of the so-called International partnership against impunity for the use of chemical weapons. Part of this initiative the group includes more than two dozen countries, including the United States, France and other opponents of Damascus in the international arena.

In his speech in the UN security Council, Russia’s permanent representative said that the approval of new chemical attack strangely coincided with the Paris meeting. In addition, these messages appeared on the eve of talks between Damascus and the opposition under the auspices of the United Nations in Vienna and to Congress of the Syrian national dialogue in Sochi.

The diplomat also has noticed that U.S. Secretary of state Rex Tillerson built his speech at the meeting in the French capital “around the incident that allegedly took place yesterday in Eastern ghouta”. “While his speech was devoted almost exclusively to Russia. Does anyone else find it strange that this supposedly happened in the episode, the accuracy of which remains to be verified, and if confirmed, to identify the perpetrators – as it very well be adjusted to meet in Paris for the upcoming Sochi Congress of the Syrian national dialogue? An amazing coincidence,” stated the sebenza.