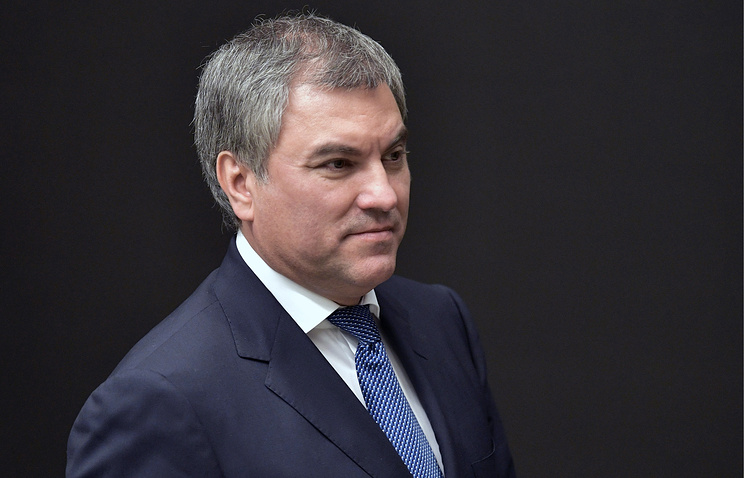 MOSCOW, January 26. /TASS./ The Chairman of the lower house of Parliament Vyacheslav Volodin has declared that he sees double standards at the request of the U.S. Ambassador to the Russian Federation of Jon Huntsman to meet with him, given the sanctions against Russian politicians.

“There should be no double standards: the United States recognized the Russian politicians banned, they extended sanctions, and now want to meet with the chairmen of the state Duma and the Federation Council. Well, it’s double standards”, – told reporters the head of the lower house of the Russian Parliament, answering the question TASS.

“We would like to avoid double standards, to respect, in an open relationship”, – said Volodin.

He added that he will decide on the meeting with the Huntsman, when the Department receives a formal request, and subject to future sanctions Washington against Moscow.

“Let’s wait for the official document and again will discuss it”, – said the speaker of the state Duma. “But when it comes to sanctions, you need to understand the consequences,” he warned.

Volodin added that he will make the decision about the meeting with the Huntsman including on the basis of whether the response of the Russian Ambassador Anatoly Antonov at a meeting with representatives of Congress.

“It depends on what is wrong, when you take and ignore such initiatives (Ambassador of the Russian Federation for dialogue with American parliamentarians – approx. TASS),” – said the Chairman of the state Duma.

“Moreover, it’s wrong twice, because, as a rule, disregard this initiative will lead to a mirrored response to the balanced position. This is also an argument in order to make a decision (about a possible meeting – approx. TASS) not in favor, and Vice versa,” he said.

Earlier Friday, the Twitter account of the us diplomatic mission in the Russian Federation the message that huntsman hopes to hold meetings with Prime Minister Dmitry Medvedev, Federation Council speaker Valentina Matviyenko, state Duma speaker Vyacheslav Volodin, chief of the General staff of the Russian Armed forces Valery Gerasimov and other representatives of the Russian authorities.