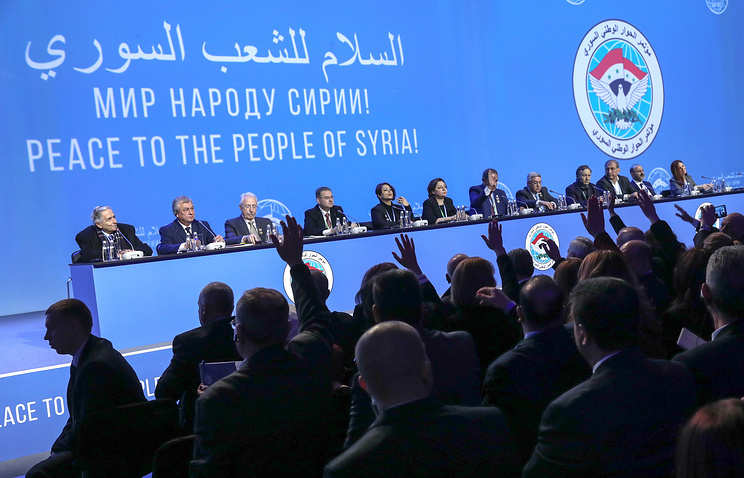 SOCHI, January 30. /TASS./ Congress of the Syrian national dialogue, in which different layers of Syrian society will begin a direct conversation about the post-war structure of the country, takes place in Sochi on Tuesday.

The public part of the Congress, which began with a two-hour delay, involved the appeal of President Vladimir Putin, which was read by the Minister of foreign Affairs Sergey Lavrov, and the election of the Congress Presidium.

The main part of the forum, the results of which 1,500 participants from Syria should form a constitutional Commission and to adopt a final Declaration on how to resolve the Syrian conflict, takes place behind closed doors.

To solve the Syrians

Opened the Congress, the elder of the forum, head of Trade Union of Syria Mohammad Hassan al-Kal. In the speech, he stressed that gathered in Sochi representatives of the Syrian people are going to “stand United to protect the sovereignty, independence and unity” against those who do not want for Syria the future.

He expressed confidence that the Syrians will succeed in the near future “to restore the country.” In addition, the elder spoke out against outside interference in Syria’s internal Affairs and urged “to stop inciting turmoil and the split of the Syrian people”.

Special emphasis is al-Kal made on the inadmissibility of intervention in the Affairs of Syria from outside and attempts to impose ready-made way out of the crisis. “We are gathered here to tell all hostile forces: “Hands off Syria!”he said. According to him, “only the sons and daughters of Syria has the right to determine the fate of their Motherland”.

The opportunity to eradicate terrorism

After the representative of Syria took the floor Lavrov, who read the greetings of the Russian leader. “Your forum is intended to re-unite the people of Syria after a nearly seven-year armed conflict that claimed the lives of hundreds of thousands of people, forcing millions to flee their homeland, – said Putin in his message. – Provided a good opportunity to realize the desire of the Syrians to end the fratricidal war, the final eradication of terrorism, the return to normal life”.

According to Putin, “Russia continues to take active steps to facilitate the establishment of lasting peace and stability in Syria, strengthening its sovereignty, unity and territorial integrity.” He noted that with the support of the Russian aerospace defence forces of the Syrian army defeated militants of the terrorist group “Islamic state” (IG banned in Russia), “seeking to turn this country into a bridgehead of international terrorism.”

The message pointed to that already formed the conditions in order to begin truly effective inter-Syrian dialogue to achieve a comprehensive political settlement under the leadership of the UN and on the basis of decisions of the international community, first of all, resolution 2254 of the UN security Council.

The presidency and appeal to the UN

Lavrov added a few words from myself. He thanked Turkey, Iran and the UN for their efforts in the preparation of the Congress, then proposed that the dialogue participants were assisted by the special envoy of the President of Russia on the Syrian settlement, Alexander Lavrentiev, as the representative of the host country of the event.

The special representative of the President of the Russian Federation clarified some of the challenges facing the Congress. He said that the participants will focus on two items on the agenda: exchange of views on the current situation in the country and ways out of the political crisis and the adoption of the final appeal of the forum participants to the UN.

Took place the election of the Presidium of the event. It includes representatives of both internal political forces and public movements of the country and some of the leaders of the “external” opposition, in particular, a member of the “Moscow” platform of the Syrian opposition, Qadri Jamil, one of the leaders of “Astana” platform Randa kassis, leader of the movement “Tomorrow Syria,” Ahmed Jarba, the representative of the “National coordination Committee for democratic change” Haissam, Mania.

The important point is that after the introductory part, left the room, not only the press, but also the observer countries to discuss ways of resolving the crisis in his country will only Syrians themselves.

Not an easy job

While many gathered in Sochi say that a common goal of achieving peace in Syria and launch a national dialogue, the long history of the seven-year conflict sometimes makes itself felt. The opening ceremony was delayed for some time, which, among the illuminating Congress of journalists, especially foreign, almost immediately began to circulate the speculation of a split in the ranks of the participants and even international observers.

Later it became known that a group of alleged members of the armed Syrian opposition, flown in from Ankara, did not reach Congress because she did not like the design of the forum, which included state flags Syria. As reported a source in the Turkish foreign Ministry, the mandate of these delegates were transferred remaining in Sochi, the representatives from Ankara.

During his speech Lavrov, the Minister has already spoken on his behalf, began shouting from the audience in Russian and Arabic, and are sounded as words in support of role of Russia in settling the Syrian crisis and against.

The Congress will help the Geneva talks

Scientific Director of the Institute of Oriental studies Vitaly Naumkin expressed confidence that the Congress will give an impetus to the Geneva negotiations. “The arrival of the special envoy of the UN Secretary General to Syria Staffan de Mistura in Sochi means that the Sochi area act in line with international law, he said. – This adds legitimacy to the Congress, the forum is not a substitute for the Geneva format.”

As for the details and work plans, these issues should be addressed to the participants of the Congress with the Syrians, said the expert. “I am confident that the decision about whether to carry out [Congress] on a regular basis and whether it will continue or not, must be found in consultation with our partners,” said Naumkin.