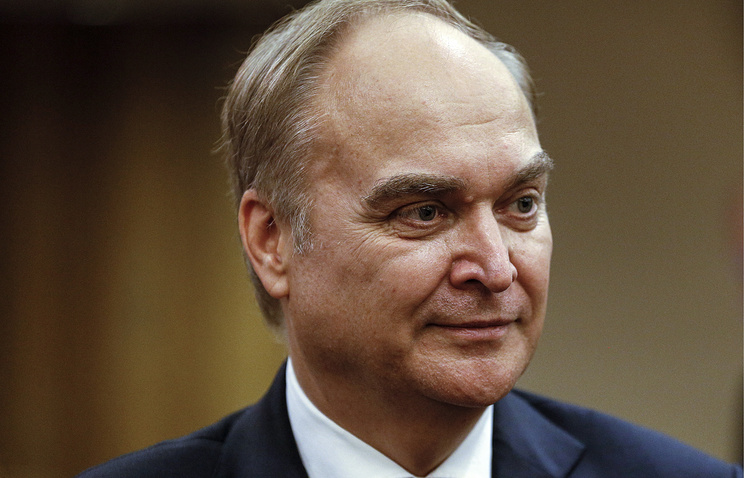 WASHINGTON, February 13. /TASS./ Overcoming the negative trends in relations between Moscow and Washington is at this stage, one of the primary tasks for Russian diplomacy. This was stated by Russia’s Ambassador to the U.S. Anatoly Antonov, speaking on Monday evening at the reception. The event was held at the Russian Embassy in connection with the celebrated February 10, the day of the diplomatic worker.

“One of the primary tasks is overcoming the negative trends in relations with the United States. It is important to talk to our American partners about the perception of the objective necessity of improvement of the bilateral dialogue. Russian-American cooperation continues to be a crucial factor influencing the key global processes,” – said Antonov.

“Only together we will be able to cope with such a plague afflicting mankind, such as terrorism. Together, to strengthen the foundations of strategic stability, to resolve regional conflicts,” – says the Ambassador.

The reception was attended by diplomats and ambassadors of several former Soviet republics. In the Russian diplomatic mission arrived, in particular, the ambassadors of Tajikistan, Turkmenistan, Uzbekistan, and charge d’affaires of Belarus in the United States. Antonov mentioned them by name and warmly welcomed. However, he noted that the republics of the former USSR bind such bonds, who “never anyone will not be broken”.

The evening was opened with a moment of silence in memory of those killed in a plane crash in the suburbs, and also about the deceased during the past year, Russian diplomats, including the permanent representative to the UN Vitaly Churkin and several other of his colleagues.

Antonov stated that “the situation in the world remains complicated.” “Growing security threats and the challenges of development require a broad unification of efforts of the international community,” he said. In this regard, the diplomat quoted the statement of the foreign Minister of Russia Sergey Lavrov that continue, “attempts “historical West” at any price to maintain its dominance, to impose its will on other countries, hinder the development of new global centers, including Russia”. “Obviously, this policy postpones the solution of pressing global problems,” Antonov warned.

“Our country is in opposition to this unifying and positive agenda. The vast majority of States sees Russia as one of the key guarantors of stability, the defender of the fundamental principles of interstate communication, such as the rule of international law, the Central role of the United Nations, the sovereign equality of States. On this basis, we successfully build equal and mutually beneficial cooperation with all ready for this foreign partners”, – said the Ambassador.

He also praised “the intensification of cooperation with colleagues from the CIS countries”. “We worked each other, successfully hold joint events. Our ongoing “reconciliation of hours” and coordination of positions on topical issues is very important and useful in work,” – said Antonov.