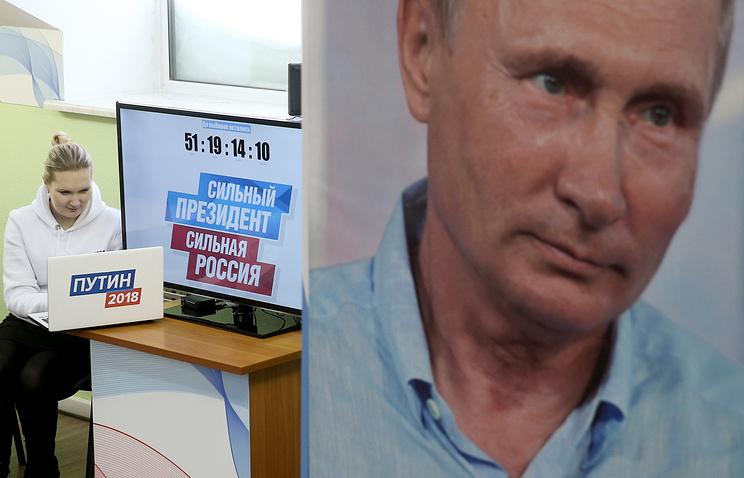 MOSCOW, February 13. /TASS./ The headquarters of the incumbent head of state Vladimir Putin, who is running for another term, said the refusal of the candidate of the free TV and radio broadcast on Federal channels allocated for debate. This was announced on Tuesday, the CEC Chairperson Ella Pamfilova before the draw allocation between the presidential candidates and nominating parties airtime on Federal TV and radio channels.

“Previously, the staff of the candidate Vladimir Putin has said the refusal of free air, allocated for joint campaign activities on channels of the all-Russian TV and radio broadcasting. A statement from an authorized representative received by the CEC of Russia of 10 February,” she said.

Each candidate is put an hour of time on each of the five Federal TV channels and three radio stations. Half of the time allocated to campaign videos, the other half on the debate.

Free live for campaigning and participation in the debate will be allotted to the presidential candidates and nominating parties on regional TV channels 338 and 280 regional radio stations, said Pamfilova. She recalled that the law shall guarantee registered candidates the opportunity to use free of charge broadcasting time on television and radio, national and regional level.

The draw is held on February 13, the eve of the start of the campaign period in the media. He will start from 17 February, 28 days before the election and ends on the night of 17 March, when the day of silence. Free airtime will be allocated to candidates and parties since February 19. Free airtime for campaigning candidates are required to submit five Federal state TV channels: “Russia 1” “Russia 24” First channel “TV Tsentr”, Russian Public television (OTR) and three radio stations: “Radio Rossii”, “Mayak” and “Vesti FM”.

By law, the independent candidate actually has four times less airtime for campaigning than the other candidates. As explained previously, the Secretary of the CEC, Maya Grishina, a free air is divided by a rather complicated formula. A third of the time allocated to parties which can freely pass it to their candidates. Half of the remaining time is devoted to the debates and other joint campaign activities such as debates and round tables.