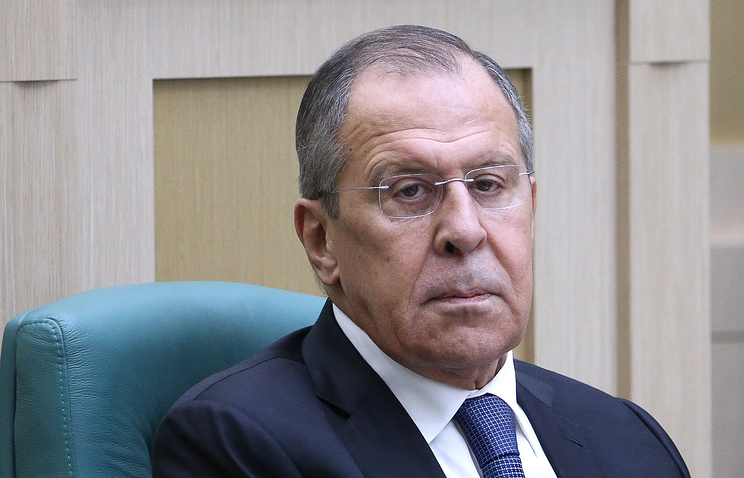 MOSCOW, February 19. /TASS/. Russia sees the aspirations of the US and the European Union to introduce anti-Russian elements in its policy in the Balkans. This was stated by Russian foreign Minister Sergei Lavrov said in an interview with the Serbian news Agency Beta.

According to the Minister, in the age of globalization there are no obstacles to the development of mutually beneficial cooperation between different countries.

“The most important thing that it is indeed the sincere desire to implement mutually beneficial specific projects, and not to make their presence felt in the region against anyone, – said the Russian Minister. We see the attempts of the USA and the EU to introduce anti-Russian elements in its Balkan policy.”

As noted by the Russian foreign Minister, Russian officials have never in any capital, whether in the Balkans or anywhere else in the world, not running around the offices, certainly not say publicly that “you cannot be friends with someone from our Western colleagues.” “Washington and some European capitals sent their emissaries to the Balkans with exactly this purpose: “do Not make friends with Russia, give up together with her in any areas,” – said Lavrov.

The Minister also drew attention to the EU requirements for Serbia to be based on the foreign policy approaches of Brussels, including “anti-Russian component.”

“It’s unfortunate, it’s sad. I really hope that it will gradually become aware of those who lead the line, – said Lavrov. It is absolutely contrary to all our joint statements that were taken after the end of the cold war that you can not strengthen their security at the expense of security of others.”

“It is trying to do, as I said, seeking to integrate the Balkans in the politics of dividing lines, in the policy of encirclement of Russia with military infrastructure of the Alliance in flagrant violation of those gentleman’s agreements that were entered into at the time, comrades and gentlemen,” – said Lavrov.

He said that Moscow, unlike their Western partners, is an open policy aimed at interaction with regional countries and those States that want to work in an open, constructive manner.

“Russia never in the history of the Balkans is not brought to the region a confrontation, and always tried to eliminate it and help the Balkan peoples to defend the interests of their state, their ancestors, their spiritual, religious, cultural, civilizational roots, – said the head of the Russian depodesta. – We are guided by this logic, developing our cooperation”.

The Minister also pointed to the joint efforts of Moscow and Turkey to promote opportunities for the Balkan countries to Russian gas. “We have actively implemented the project “Turkish stream”, – he said.

“We are ready to make any decisions, considering the interests which are at the Balkan countries, the European Union. Here we have a completely open agenda, no hidden intentions,” – concluded Lavrov.

The Russian Minister stressed that the relations of Belgrade with Moscow and the European Union is the choice and responsibility of leadership.

Responding to the remark of the journalist that, in the opinion of some representatives of Serbia, the President of the country Alexandru Vucica have to choose between Moscow and Brussels, Lavrov stressed that “it will be the choice of the leadership of Serbia”. “I’m sure he will be done with full awareness of their responsibility to the Serbian people”, – noted the Minister.

“If the demands put forward by the EU will be met by the Serbian people to support it will be his choice. And the President, of course, like any head of state should Express the mood of his people, – said Lavrov. I think the President of Serbia Aleksandar Vucic is fully experiencing that responsibility”.

The Russian foreign Minister noted that “survived, referring to the priorities of Serbia, the task of joining the European Union, never talked about the fact that this will be done at the expense of Russia”. “On the contrary, he emphasized that the Russian vector of foreign policy and cooperation will remain very important for Serbia. I am convinced that it is in the interests of the Serbian people”, – said Lavrov.

“Spy nest” in the Niche

The Russian foreign Minister called statements of the West that the Russian-Serbian humanitarian center (RSHC) in the Niche constitutes a threat and is a “spy nest” is funny.

“If our colleagues from NATO are still in doubt about whether the humanitarian centre, and not, as they call it, “spy’s nest”, advise them to refer to those reports which had to write assistant military attache of the USA in Serbia after visiting the centre in the Alcove. He was invited there, examined all that interested him, – said Lavrov. – I am convinced that it is ridiculous to pretend that this represents some kind of threat to anyone”.

The Minister noted that the centre employs four Russian citizens, the rest of the staff – the Serbs, “which is also a bit: I think 12 to 15 people”.

Lavrov drew attention to the fact that the center is in the Niche “deals exclusively with the solution of the problems connected with liquidation of consequences of natural disasters”. “In addition to Serbia, assistance was also Macedonia, Slovenia, Greece, Bosnia and Herzegovina. So the international character of the activities of this centre are not only enshrined on paper but also in practice”, – said the head of the foreign Ministry.

The lack of an official status

Referring to the situation around the lack of official status of the centre, the Minister said that the agreement on its establishment from 2012 includes the signing of agreements on conditions of activities, privileges and immunities of the members of this international structure, “because she was just as international as well as the representative office of the International Committee of the red cross, a number of other organizations.”

Lavrov noted that it is not about diplomatic privileges and immunities on the service.

“In this situation, we are mindful repeatedly given us assurances that the Serbian leadership does not consider it justified to abandon the agreement which the agreement on the establishment of the Centre. At least, the privileges and immunities that we ask for four employees of Russia, no more, of the privilege that we have serving US military base “Bondsteel” and possessed soldiers of NATO countries when they conduct a large number of exercises on the territory of Serbia”, – said Lavrov.

According to him, in Moscow with great respect for the commitment of the Serbian leadership to the principle of military neutrality.

“We see the interest of the [Belgrade] to develop relationships, as in the case with the economy, the military-political sphere with the West and the East, including Russia, and in the framework of cooperation of Serbia with the CSTO,” – said Lavrov. “However, the issue of humanitarian center in NIS has become so odious, so the facts of the case, four of a Russian citizen, does not match the hysteria raised in the West, it seems to me that any sane person, assess the situation, understand that she was created artificially and do not, as we say, damn,” – said the head of depodesta.

“We don’t tell each other to do against the interests of their own country. But there are such things as international agreements of national independence” – summed Lavrov.

RSGC established under the agreement between the government of the Russian Federation and the government of Serbia, dated 25 April 2012, which was signed in NIS, the Russian Minister of emergency situations Vladimir Puchkov and the Minister of internal Affairs of Serbia (at that time) Ivica Dacic. The legal basis of the education Centre was the agreement between the two governments on cooperation in the field of emergency humanitarian response, prevention of natural disasters and technogenic accidents and elimination of their consequences, of 20 October 2009.

The center is an intergovernmental humanitarian non-profit organization that enjoys the rights of a legal person registered in Serbia in accordance with the law. The center was created to provide humanitarian response to emergency situations on the territory of the Republic and other countries of the Balkan region. It is responsible for carrying out measures for prevention and liquidation of emergency situations and providing emergency humanitarian assistance to populations affected by emergencies. The center also is responsible for the implementation of joint projects and programs in Serbia and other Balkan countries, including for humanitarian demining.

Russia in the media space of the Balkans

The Russian side is interested to be present in the information space of the Balkan region, Lavrov said.

“We are interested to be present in the information space of friendly countries with whom we have in many cases centuries of relations. If you look at the statistics, don’t know, but I’m sure that the numbers regarding what percentage of the Balkan information space is Russia and what Western media will be quite convincing,” he said.

“Probably, in order to have pluralism of opinions, which is constantly our partner Western Balkan listeners, viewers, users of social networking wouldn’t hurt to have an extra viewpoint,” – said Lavrov.