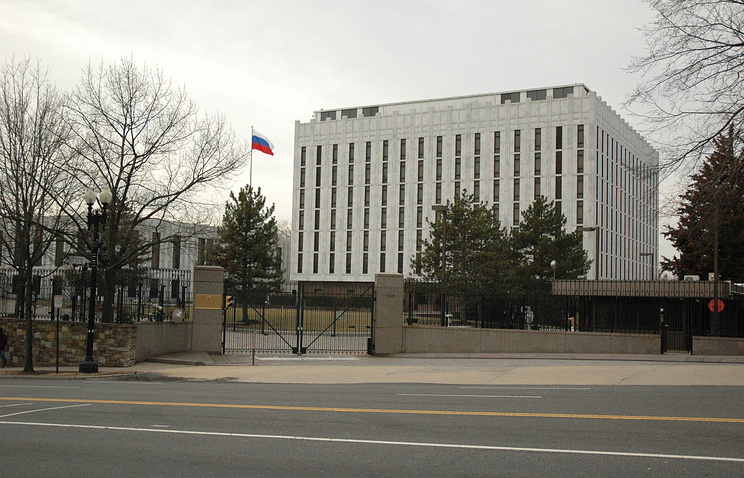 WASHINGTON, February 19. /TASS/. Russia in light of the attacks of the nationalists in the building of Rossotrudnichestvo in Kiev expects that the Washington officials should not support the “cave nationalism” in Ukraine and other Eastern European countries. This is stated in a statement on Sunday statement of the Russian Embassy in Washington.

“We expect from the Washington officials termination practices support cave nationalism. Not only in Ukraine. But in the other countries of Eastern Europe. This, as shown by the events in Kiev, is fraught with riots, the escalation of manifestations of xenophobia and extremism”, – the document says.

As stated by the Russian Embassy in Washington, “it is not excluded that inspired such actions [in Kiev] as an example, which Washington and gives, the seizures of Russian dipartimenti”. “Russia appealed to the OSCE with the requirement to respond quickly to a flagrant manifestation of aggressive nationalism and to issue an urgent report on the incident to the barbarism knew all of the participating States of the OSCE,” – said the Embassy.

Sunday neo-Nazi group “the Organization of Ukrainian nationalists” (OUN, banned in Russia) broke Windows and damaged a door in the building of Rossotrudnichestvo in Kiev. Shouting anti-Russian slogans, the nationalists also attacked the offices of Alfa-Bank and Sberbank of Russia, located nearby.

Previously, on February 17, about 30 representatives of the nationalist organization C14 (Sich) and extremists of “Right sector” (in the Russian organization is prohibited) attacked the Russian centre of science and culture. They painted the walls black and red paint, and defiled the Russian flag.