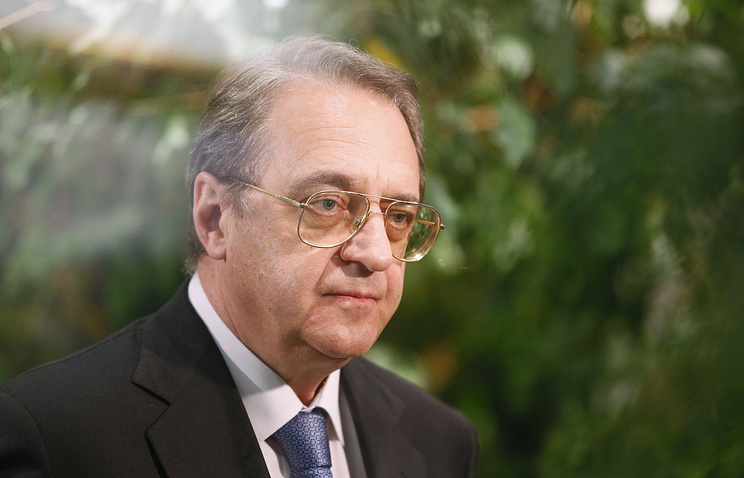 MOSCOW, February 19. /TASS/. Russia stands for the active implementation of the decisions taken at the Congress of the Syrian national dialogue in Sochi, especially constitutional reform. On Monday said the presidential special representative for the Middle East and Africa, Deputy foreign Minister Mikhail Bogdanov.

“Are compiling the lists of Commission members,” – said a senior diplomat.

Bogdanov also stated that the zone of de-escalation in the Arab country should not become a zone of influence of foreign States. “When the active role of Russia created a process of Astana with the participation of three countries – guarantors, we were told that this process should take place under the auspices of the United Nations, bearing in mind that the zone of de-escalation should only be temporary in nature,” he said.

“Areas in demand from the point of view of the cessation of hostilities, but at the same time we cannot allow the areas of de-escalation has turned into the zone of influence of foreign States”, – said Bogdanov.

The participants of the forum in Sochi adopted a statement of 12 points, which outlines the views of the Syrians in the future of their country. It notes that Syria needs to maintain the sovereignty and territorial integrity, and its future can be determined only by the Syrian people through elections. The Syrians also appealed to the UN Secretary-General antónio Guterres with a request to assist in the organization of work of the constitutional Commission, whose mandate will be defined in the framework of the Geneva process.

According to the organizers, the Congress was attended 1511 delegates representing all segments of Syrian community. Ethnic composition the majority of the participants – the Arabs (94,5%), but among those invited were the Kurds, Yazidis, Assyrians, Armenians, Circassians, Chechens, Dagestanis, Abkhazians, Turkomans and Druze. To participate as observers were invited to all the major regional and international external actors. One of the objectives of the forum was the establishment of a Commission for drafting a new Constitution of Syria.

From the beginning of may 2017 in the Arab Republic created four zones of de-escalation, the corresponding agreement was reached in Astana by the representatives of Russia, Iran and Turkey. In mid-September, they announced the work of all areas. Formerly operated three zones: in the South of Syria, in the Eastern ghouta (suburb of Damascus) and near the city of HOMS. In the fourth zone included the province of Idlib and parts of the neighboring provinces of Aleppo, Latakia and Hama.