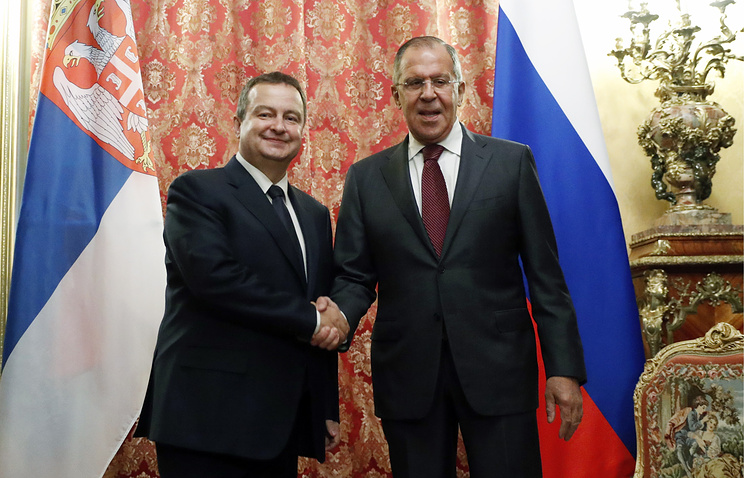 MOSCOW, February 21. /TASS/. Russia and Serbia oppose the evil practice of imposing countries of choice “with us or against us”, which has led to more instability in Europe. This is stated in a joint article the foreign Ministers of the two countries Sergey Lavrov and Ivica Dacic, the Serbian newspaper “Politika” and “Rossiyskaya Gazeta”. The article is devoted to the 180th anniversary of diplomatic relations between Russia and Serbia.

“A hallmark of cooperation is respect for the choices and the interests of each other. Moscow and Belgrade – opponents of bad practice “with us or against us”, which has led to increased distrust and instability on the European continent”, – emphasized in the material.

“Our countries are independent, pragmatic and balanced foreign policy, based on its own national interests. We are the unconditional supporters of the respect enshrined in the UN Charter basic principles of international relations such as sovereign equality of States, noninterference in their internal Affairs, peaceful settlement of disputes. Consistently overcoming challenges and threats of our time, firmly based on international law,” said the Ministers.

Dacic and Lavrov drew attention to the fact that the political dialogue between the two countries “is developing dynamically in the atmosphere of trust and understanding at work and at the highest level in December 2017 has successfully passed the visit of the President [of Serbia] Aleksandar Vucic to Russia.” “We note with satisfaction the positive dynamics of trade-economic and military-technical relations, successful implementation of joint projects in energy, transport, culture. Gained solid contract-legal base Russian-the Serbian relations, which is consistently expanding,” the article reads.

“Today we are facing large challenges regarding the further disclosure of the inexhaustible potential of the Russian-Serbian partnership. Are convinced that to accomplish them there are all necessary preconditions, the main one being – tested traditions of friendship and trust, – said the head of depodesta. – We will continue working to fasten them – for the benefit of present and future generations of citizens of our countries.”