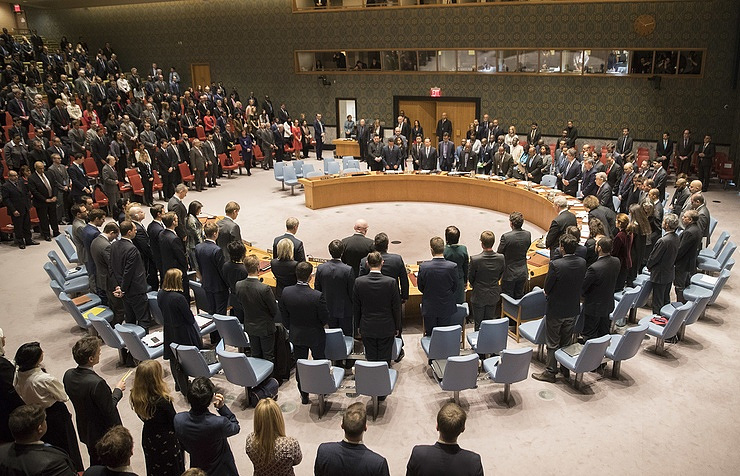 UN 27 Feb. /TASS/. Russia on Monday blocked the adoption of uncoordinated draft resolution of the UN Security Council on the extension of the sanctions regime in Yemen, which has accused Iran of illegal deliveries of weapons to rebels-Houthis. Immediately after that vote made the Russian version of the document, which passed unanimously.

A mismatched document prepared by the UK, voted by 11 States, two spoke against Russia and Bolivia – and two abstentions – Kazakhstan and China.

Both resolutions called for the extension until 26 February 2019 the arms embargo and other sanctions, including the freezing of assets and travel bans on those involved in destabilizing Yemen, and the authority monitors the implementation of these restrictions, the expert group until 28 March 2019. While the British text contained accusations against Iran by the Western countries suspect him of illegal arms to Yemeni insurgents. In addition, it expressed “the intention to take further measures in response to these violations”.

Before the vote, the acting permanent representative of great Britain Jonathan Allen reported that the security Council members on Monday spent more than five hours in “advanced negotiations”. “We tried to agree on a text containing a balanced and impartial assessment of the situation in Yemen, but who would openly pointed to those whose actions undermine international peace and security,” – said the diplomat.

Explaining the decision to vote against the British document, Russia’s permanent representative to the UN, Vasily Nebenzia said that Moscow could not agree “with unconfirmed findings and information, which require verification and discussion in the sanctions Committee”. According to him, during the negotiations on the text of a future resolution, the Russian side proposed “is not one of compromise language”, but the idea of Federation was rejected.

The diplomat stressed that Russia “in principle opposed to the extension of the technical expert groups of the sanctions committees took place in a politicized way and to use them to solve is not technical, expert, and geopolitical objectives”. According to him, the need to continue expert work is the fact that just three days ago, the Russian Federation sent a request of the UN Secretariat [c] to clarify some details of the intended use of weapons in Yemen.”

The experts ‘ findings and initiatives of the U.S.

Conclusions about the involvement of Iran’s violations of arms embargoes are contained in the latest report of the UN expert group on Yemen, which analyzed the fragments of a ballistic missile launched by Yemeni rebels in Riyadh in November of last year, as well as other weapons and equipment at the disposal of the American side. The UN experts came to the conclusion that the weapon was imported to Yemen after in 2015 in respect of countries have imposed arms embargo. The Iranian side, according to experts, “has not taken the necessary measures to prevent the direct or indirect supply, sale or transfer of” military equipment and technologies. As highlighted in the report, Tehran has not provided explanation how the weapon could get to Yemen.

According to diplomats, the meeting of the UN security Council on Yemen in late January, Russia and China expressed skepticism about the conclusions of experts. According to Moscow and Beijing, they were not provided the proper level of preservation of physical evidence, that is, there is no guarantee that the equipment was examined by experts, indeed is available to the Yemeni rebels.

February 15, the U.S. permanent representative to the UN, Nikki Haley said that the Security Council had time to respond to the failure of the Islamic Republic of decisions of the world organization. In late January, the diplomat arranged for members of the security Council trip to Washington, where they viewed the wreckage of missiles and other military hardware allegedly of Iranian origin. In the Tehran charges in the address reject, and evidence of violations of the arms embargo called fabricated.

The results of the voting in the security Council with anti-Russian tirade made by the delegation of the United States, which was among the countries most actively campaigned for the adoption of the British version of the resolution. As argued by American Kelly Curry, Russia was forced to use the veto to protect “Iran’s efforts to destabilize the region.” According to her, the acceptance of the British resolution “prompted common sense.” “But this logical attempt to bring Iran to justice failed, and all members of the Council should be aware of the potential consequences of this,” the diplomat said.

She stressed that ultimately, Iran’s actions “will not remain unanswered”. “Today’s vote is deeply disappointing, but efforts to bring Iran to justice is not over,” warned Curry.

Responding to attacks from the American side, Russia’s permanent representative to the UN reiterated that Moscow did not support the draft resolution proposed by London, not because he wanted her “to ruin by any means,” but because they “failed to reach agreement on some individual, but the key definitions.” “The goal of the resolution is the extension of the mandate of the panel of experts on Yemen, not the prosecution of Iran or an attempt to put together an anti-Iranian coalition. Statement of the representative of USA confirmed that our concerns in this respect were not in vain,” – said Vasily sebenza.

He welcomed the unanimous adoption of the Russian resolution and thanked the Council delegation that they “made the right decision.” According to him, the unanimous adoption of the resolution “opens up the possibility for further collective work” under Yemeni settlement, as well as to “improve the situation in the region as a whole.” He called for the continuation of the investigation information about the launch of missiles on the territory of Saudi Arabia, and stressed that to solve the problems of the region “requires a consolidated approach” with all key players, including Riyadh and Tehran.