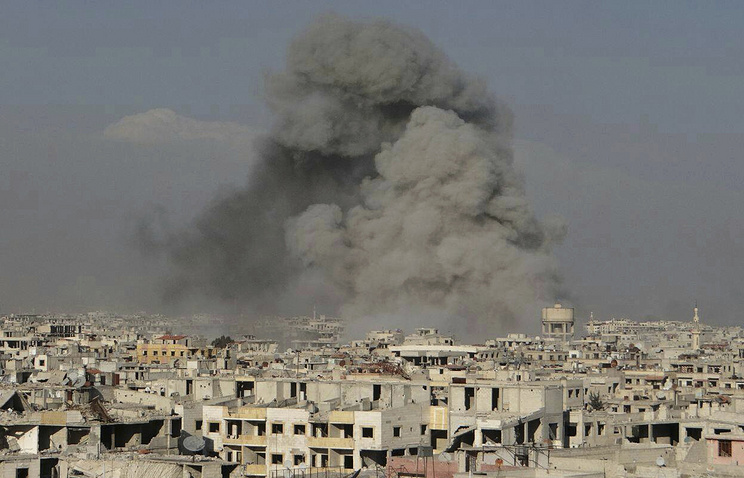 MOSCOW, February 28. /TASS/. The second humanitarian pause in Eastern Guta were disrupted as previously announced on Wednesday, the Russian journalists the representative of the Centre for reconciliation of the warring parties in Syria the General-major Vladimir Zolotukhin.

Humanitarian pause in Eastern ghouta began on Wednesday with mortar fire fighters. In a result, more than 300 civilians are unable to leave the dangerous area.

Russia is ready to discuss any options that will allow to neutralize the terrorists to cease their activities and save lives, said the Russian foreign Minister Sergei Lavrov. Moscow would not oppose the withdrawal of the militants groups “Dzhebhat EN-Nusra” (banned in Russia) from Eastern ghouta, he added.

After 09:00 am Damascus time (10:00 GMT), when formally began the humanitarian pause, the militants continued to fire mortars and small arms on government positions in the area of humanitarian corridor in the village of El Vafidin.

By words the General-the major, the Russian military together with representatives of the Syrian authorities are ready to start taking and to provide necessary assistance to all civilians of Eastern ghouta. “Here, the El Vafidin, which has a humanitarian corridor, everything is ready to receive civilians, including evacuation of the wounded and sick from the Eastern Guta. All the civilians and patients will be transported here by bus in located 6 km to the North-East point of reception ed-Douar,” – said Zolotukhin. Ambulances and buses, designed for civilians, continue to be on duty at a humanitarian corridor in the settlement of El Vafidin.

“Received a few hours ago data, on the northeastern outskirts of the Duma in the morning gathered more than 300 residents who are unable to go to the humanitarian corridor because of the attacks of the militant group “Jaish al-Islam,” he said.

Residents of the city of Duma on the outskirts of Damascus for a second day can’t take advantage of the humanitarian pause to exit the armed groups-controlled areas. As have informed on Wednesday TV channel Suria, terrorists from “al-Nusra Dzhebhat” and other gangs intimidate civilians and blocked the passage through the checkpoint in your high-Hajari on the southern outskirts of the Duma, which leads to the humanitarian corridor, refugee camp of El Vafidin.

According to the channel, militants opened fire on those who try to approach the humanitarian corridor. On Tuesday five women were injured in that moment, when tried together with their children to get out of Eastern ghouta to the town of Duvar where deployed mobile center of reception of citizens and providing them with necessary assistance.

The population of the Duma before the war amounted to 800 thousand people, however, according to experts, now reduced about half. This city is a major Outpost of Islamic group “Jaish al-Islam”, which receives financial support from Saudi Arabia.

According to the newspaper Al-Watan, the militants were forced to remain residents, hoping that Syrian air force would refrain from striking at densely populated areas. According to the publication, the inhabitants of the Duma have repeatedly staged street protests and demanded that the “Jaish al-Islam” to conclude the agreement on local reconciliation with the Syrian authorities, which allowed to establish the supply of the city and to restore the destroyed infrastructure. However, these performances were cruelly suppressed.

Every effort is made

Russia is doing everything possible to ensure humanitarian pauses in Eastern ghouta in accordance with UN security Council resolution, said the press Secretary of the President Dmitry Peskov.

“However, provocations that continue by the terrorists, unfortunately, do not give an opportunity to properly get this situation resolved,” said he. The representative of the Kremlin said that Moscow and Damascus “continue to strive to provide the necessary humanitarian conditions” in the region.

Answering the question about the degree of influence of the Russian Federation on the Syrian authorities, Peskov said about the partnership relations of the two countries. He also stressed that the Russian military is the only foreign troops that are legitimate are in Syria, so how do they do it at the request of the Republican leadership.

Agree on the withdrawal of militants

For the sake of salvation of human lives, Russia is ready to support the withdrawal from Eastern ghouta militants groups “Dzhebhat EN-Nusra” (banned in Russia), said on Wednesday Russian foreign Minister Sergei Lavrov. “We are ready for a variety of solutions. Used the method of voluntary withdrawal of the militants with their families, when they decide the problem of the liberation of Eastern Aleppo,” he recalled.

“We are ready to discuss any options that will allow you to neutralize the terrorists to stop their activities. If they can be somewhere to take it, then we will not object”, – stressed the Minister. “If our UN colleagues, and those who are affected by “an-Nusra”, agree on the possibility of this care, we won’t mind,” – said Lavrov.

The UN Security Council on Saturday adopted a resolution requiring the parties to the conflict in Syria to cease hostilities for at least 30 days to provide humanitarian assistance to the population. The document was supported by all 15 member States of the security Council, including Russia. According to the resolution, the truce would not apply to military operations against the group “Islamic state” (IG banned in Russia) and other terrorist organizations.

Monday, 26 February the Russian defense Minister, army General Sergei Shoigu said that on behalf of the President of Russia Vladimir Putin in the Damascus suburb of Eastern ghouta from 27 February introduced the daily humanitarian pause from 09:00 (10:00 GMT) to 14:00 (15:00 GMT) local time. In the village Vafidin the Syrian authorities with the support of the Center for conciliation of the warring parties of the Russian Federation in Syria prepared the conditions for the reception of the civilian population through a single humanitarian corridor that links Damascus with Eastern Ghouta.