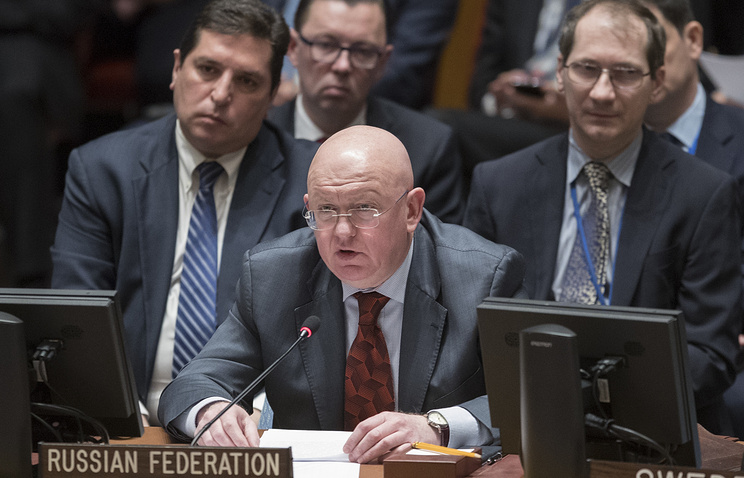 UN 28 Feb. /TASS/. Terrorists remain a “legitimate target” of military operations in Syria, and ceremony of them will not.

This was stated on Wednesday, Russia’s permanent representative to the UN, Vasily Nebenzia at the meeting of the Security Council.

He commented on the letter received from UN armed groups in the Eastern ghouta, which has expressed willingness to send from this suburb of Damascus members of the terrorist organization “dzhebhat an-Nusra” (banned in Russia). According to him, Russia is waiting for “clear assurances to this effect from the external backers of militants,” including those countries which are members of the UN security Council.

“You have to understand that terrorists remain a legitimate target of military operations, and ceremony of them will not” – said the diplomat, suggesting that the members of the security Council “to see how it is possible to effectively neutralize the “Dzhebhat EN-Nusra” in Eastern ghouta”.

On Wednesday, the opposition “free Syrian army” has sent a letter to UN expressing readiness to withdraw its terrorists from Eastern ghouta. At the meeting of the security Council Deputy UN Secretary-General for political Affairs Jeffrey Feltman acknowledged receipt of the message of the opposition, which, according to him, ready to expel “members “Hayat Tahrir al-sham”, “Dzhebhat an-Nusra”, “al-Qaeda” (zapremina RF) and everyone who belongs to these groups in Eastern ghouta”.

Russia proposed the UN Security Council to adopt a statement in support of the implementation of the resolution on the cessation of hostilities in Syria, said the sebenza. He read excerpts from the Russian Federation draft statement. In it, in particular, calls upon all parties to implement resolution on a ceasefire, and the request to members of the armed opposition and the countries with influence on them “to ensure the safety of humanitarian corridors for the evacuation [of civilians] from Eastern ghouta”.

In his speech, Russia’s permanent representative urged all member countries of the UN security Council to join the efforts to resolve the conflict in Syria “not to put a spoke in the wheel”.

Also, according to Nebenzu, Russia calls the U.S.-led coalition in Raqqa to prevent United Nations employees, and to transfer its controlled areas under the responsibility of the Central government.

“Insist that the United Nations had quickly dispatched in Raqqa assessment mission, and the coalition de facto control of the district is to provide all the necessary conditions. We also anticipate that the coalition command instead to create quasiadministrative liberated from ISIS (banned in Russia grouping “Islamic state”) areas to plan their transfer under the responsibility of the Central authorities, given many times and perepodchinenie confirmed by the Security Council of the sovereignty and territorial integrity of Syria,” – said the diplomat.