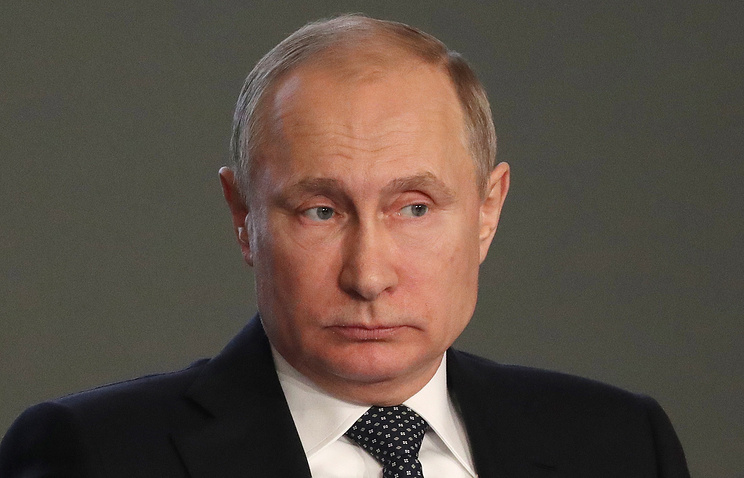 MOSCOW, February 28. /TASS/. Russian President Vladimir Putin has called the fight against extremism a priority of the internal Affairs bodies. Speaking Wednesday at the annual expanded meeting of the Collegium of the Ministry of internal Affairs, the head of state pointed to the need to “resolutely curb the activity of” extremist groups.

Putin drew attention to the decline in the overall level of crime and demanded “significantly improve the quality of investigation and inquiry”.

“Absolutely unacceptable,” called the President of pressure upon business from law enforcement bodies. He added that he intends to raise the subject in his address to the Federal Assembly on Thursday.

The head of state stressed that one of the main tasks of law enforcement is to ensure safety in public places, especially schools, in transport, during sports and entertainment events. In this regard, he instructed the interior Ministry to “ensure maximum safety” during carrying out in Russia of world football championship.

The fight against extremism

MIA in 2017, in conjunction with the security agencies and the departments of Regardie, liquidated in Russia “of 14 international terrorist organizations and three of the gang”, said the Minister of internal Affairs of Russia Vladimir Kolokoltsev.

The Minister said that the control of the interior Ministry, there are more than 2 thousand Internet resources that can be used for extremist purposes, including for the recruitment of new members and coordination for the organization’s extremist actions. He added that according to the materials of the interior Ministry last year, recognized as extremist and banned four organisations, in a number of regions “arrested active participants particularly dangerous nationalist groups”.

As the Minister said, at the same time carried out large-scale prevention efforts focused on youth. “High profile incidents, is able to provoke an escalation in society, not allowed”, – he said, stressing that the number of acts of a violent nature in the field of extremism has declined during the last three years, more than 2.5 times.

However, as said in his speech, the President, the total number of extremist crimes increased last year by 5%, with a number of groups have acted “boldly and provocatively”. “We need to strongly suppress the activities of such groups and prosecute their organizers. Any illegal acts aimed at splitting the society, to destabilize the situation, is a serious threat. Your direct duty is promptly to neutralize it”, – the President set the task before the leadership of the Ministry.

The head of state highlighted the strengthening of some positive trends in the Ministry of interior, but at the same time stated that the improvement is across the Board. “In 2017, the Ministry of internal Affairs has strengthened a number of positive trends: increased detection of certain types of crimes, including murders, assaults, burglaries,” said Putin. According to him, was also able to reduce street crime and provide an appropriate level of security for major international events.

“However, not all areas, the situation is just prosperous,” he said. “Decreased almost 43% of the total number of crimes solved, – he explained. In recent years, this figure jumps: grow up, then again will be reduced. Fundamentally, the apparent improvement of the situation, unfortunately, is not happening”. “So, the key principle of inevitability of punishment is not realised in full”, – said Putin and demanded “significantly improve the quality of investigation and inquiry”.

According to the data, which led to meeting the head of the interior Ministry, the clearance rate of homicide in Russia has reached 92% in 2017, the crime involving the infliction of grievous bodily harm, and 93%, rape – 98%, robberies – 69%. 18% reduction in the number of grave and especially grave crimes on home soil.

The number of police officers, grossly violated the service discipline, since 2012, has decreased in Russia three times, informed the Minister. 10% decrease in the number of employees subject to criminal prosecution. The Minister also noted that over 70% of crimes of corruption among interior Ministry employees revealed by its own security of bodies of internal Affairs.

The problem of teenage crime

Close attention was paid to the participants of the meeting the problem of juvenile delinquency. “Last year a 16% decline in the number of crimes committed by teenagers, but attention to this area should remain consistently high,” asked Putin to the leadership of the Ministry of internal Affairs. The Russian leader stressed that it is necessary to respond promptly to all signals coming from teachers, parents, students themselves need to more actively engage in the prevention of juvenile delinquency.

This work, according to the President, should not only cover those in the so-called risk groups. “It happens that children from wealthy families fall into difficult situation. The main thing – time to identify and solve acute problems that they do not lead to troubles and tragedies,” – said Putin.

He demanded from the police to respond quickly to violations of public order in schools. “In the field of your constant attention needs to be social, especially educational institutions. We must do everything in order for the school and our children’s lives was quiet, to minimise potential offence”, – said the head of state.

“Targeted work covered 290 thousand children who have committed offenses. Every third removed from the register in connection with the hotfix. Overall, since 2012, the number of wrongful acts committed by teenagers has declined by a third,” – said the Minister. According to him, “in the field of view was 218 thousand parents who are not fulfilling their duties”.

The President elaborated on the problem of the relationship between law enforcement and business. “Special attention should be paid to create a favorable business environment, the protection of the legitimate interests of the business, to thoroughly investigate the facts of pressure on entrepreneurs, their unjustified harassment, including from law enforcement bodies, which is absolutely unacceptable, tomorrow I will talk about it in the Message to the Federal Assembly”, – said Putin. The head of state noted that “these offences – a special kind, because it undermines people’s faith in law, justice, freedom of economic activity”.

Speaking of the fight against crimes in the sphere of the economy, Putin called for “consistently clean from crime and the grey and shady schemes of the banking system, energy, manufacturing and construction industry.” “We cannot relent in the fight against corruption, we should actively identify those who are profiting at public expense, uses his official position or powers for illicit enrichment, to respond immediately to complaints of people with all sorts of extortion,” he added.

The Minister in his speech noted that “in some sectors of the economy, maintained a high level of criminal infestation. Difficult situation in the energy sector of the North Caucasian Federal district, where the identified major theft of resources and corruption”. He also said that last year there were almost 30 thousand corruption cases, the damage from which amounted to 34.5 billion rubles. “There are 13 thousand persons involved in corruption offences, every 12th held a position in the Executive authorities,” – said Kolokoltsev.

According to him, in 2017 as a result of illegal withdrawal of funds “revealed the damage for the sum more than 66 billion rubles, as well as measures taken for its compensation in the amount of 35 billion rubles.”

Russia should create conditions for effective regulation of migration flows taking account of the legitimate interests of its own citizens, Putin said.

“There must be order in migration sphere”, – he said. The head of state noted that in recent years the procedure of registration of migrants and issuing of patents has been significantly simplified, and “we must continue to create conditions for effective regulation of migration flows, for a civilized solution of all issues arising in this area.” “And, of course, [you need] in any case, not to forget the legitimate interests of our own citizens,” Putin said.

“There are more than 775 thousand crimes in the sphere of migration. Outside the country expelled nearly 69 thousand foreign citizens from more than 190 thousand prohibit entry into the country”, – reported the Minister.

Speaking about the immediate tasks of the bodies of internal Affairs, Putin has demanded from law enforcement agencies to provide citizens the opportunity to Express their opinion during the election period legally. “Every citizen has their own opinion about what he should do during the election period, as to Express his own opinion – and all the statutory ways of expressing this opinion should be guaranteed by law and law enforcement,” – said the President.

“Anyone who commits any of the action, must proceed from the fact that we must act solely by the law, he added. – It must be referring to law enforcement bodies, organizers of any shares.”

He noted that in this task, the role of the police. Putin expressed confidence that the already accumulated a huge positive experience will allow the MVD and in the championship, and in any situation to react properly, in strict accordance with the law. “Your clear, competent work directly depends on how to host this event, and the image of our country”, – concluded the President.